Updated: Four children arrested on their way to school 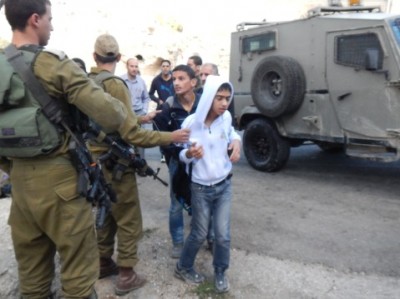 The children being detained by Israeli soldiers (photo by ISM).

Update 10th October: Two of the four children are now being held in Ofer Prison in Ramallah. They have been in custody since Sunday (6/10/13) morning. More updates will be published when they are available.

Yesterday, Sunday the 6th of October, at 7:40 AM in Khalil, four children aged 12 and under (Sami Bent, Munif Darna, Muhammad Mussa Kremeri and one unconfirmed name) were arrested whilst on their way to school after a small gathering of children threw stones at Israeli soldiers.

At approximately 7:20 AM around 100 children were attempting to walk to school when they noticed 3 soldiers standing underneath a building. This was unusual behaviour from the soldiers and some of the youths and children present began to throw stones. Whilst these soldiers drew the attention of the children, 5 other soldiers approached from an alley. These soldiers then charged the crowd of children indiscriminately attempting to detain the nearest child regardless of whether they had thrown stones or not. As a result of this 4 young children were arrested.

International activists and local Palestinian’s challenged the legitimacy of these actions to no avail. After detaining these children behind army vehicles they subsequently released an 8 year old child from their custody. However shortly after this, they arrested Sami, a 12-year-old child.

These 4 children were then placed into the back of 2 army vehicles and driven away. Upon subsequent investigation the international activists who where present learnt they had been taken to a local police station located inside an illegal settlement. The activists then attended this site in an attempt to talk to an officer and notify them the children they had arrested where innocent of the alleged charges. The police officers would not interact with the activists and refused to bring a superior officer. It is currently unknown whether the children remain in custody, however activists groups were able to confirm they were still being held at 4pm yesterday afternoon.

The children of Khalil are regularly harassed by the Israeli forces; a recent incident was filmed where Israeli soldiers fired stun grenades and tear gas canisters towards crowds of school children.