New
Home / Nablus / Demolition order in the village of Tawayel

Demolition order in the village of Tawayel 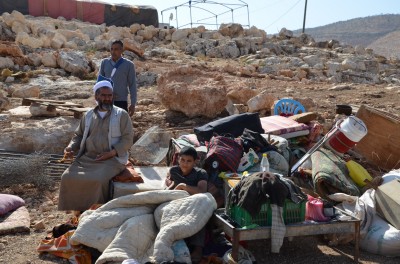 A family after their home was demolished

Today, Tuesday 29th October, Israeli soldiers invaded the village of Tawayel in the early hours of the morning to demolish several buildings and a water reserve. The demolition continued into the afternoon, where two international activists were detained before being released shortly after.

Early this morning at around 5am, the Israeli army arrived in Tawayel with several military jeeps and three bulldozers. They began by demolishing a sheep enclosure before continuing to destroy the house of one farmer. The former home of this family was completely destroyed, but Israeli forces then demolished a water reserve. This means the soldiers removed the water supplies for several families and their animals in the area.

When Israeli forces continued in their demolition by moving their focus to another house, used as a storage room, four international activists sat in front of the bulldozer to try to prevent the demolition. Several Israeli soldiers and border police told them to leave and when they refused, took one French activist and pushed her into an army jeep. Shortly after this, border police grabbed a German activist, handcuffed him and placed him in the military jeep. The farmers and the internationals then had to watch, while the Israeli army destroyed the storage room. After they were finished, they released the activists, without taking their passports or even their names.

Tawayel is a village close to Aqraba. The landscape is mainly desert, which makes it difficult for the farmers in the area to build a structured water supply. The village is Area B, but many farmers are living outside of the village, where there is more space for their sheep and animals. These farmers and their families have been living in this land for generations, though the army declared it Area C. Most of the houses the farmers are living in are quite old and in the last few years they constructed infrastructure to simplify water supply, they also built new shelters for their sheep in order to protect them from the summer sun, the cold in the winter and wild dogs. For these new buildings the farmers sent several aplications for planning permission, they did not receive a response from the Israeli government and this is why the administration declared those constructions as illegal.

This kind of structured demolition has happened before in Tawayel and the harassment from the Israeli army is ongoing, although they have never bothered to answer the permit requests from the farmers.