Bil’in continue their weekly demonstration against the occupation 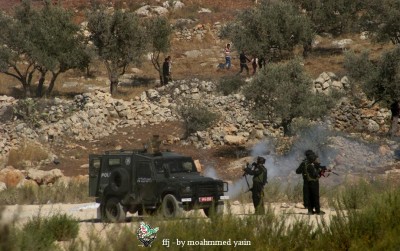 The Rafeeq Al Khateeb family suffered from tear gas inhalation, fired by Israeli soldiers, while they were attempting to pick olives from their land. Tear gas canisters are often used by Israeli forces in the weekly Friday demonstrations, and yesterday was no exception with many protesters struggling with the large amounts of tear gas fired.

The Friday protest began after afternoon prayers, with Palestinian, Israeli and international activists marching from the village towards the Apartheid Wall. Israeli soldiers met the activists and fired stun grenades, tear gas and plastic-coated steel bullets. Israeli military vehicles then attempted to break up the demonstration and chase protesters away from the Apartheid Wall back towards the village. Bil’in has been demonstrating since 2005 and despite the violence and aggression of the Israeli army, the people of Bil’lin will continue their struggle against the Occupation.