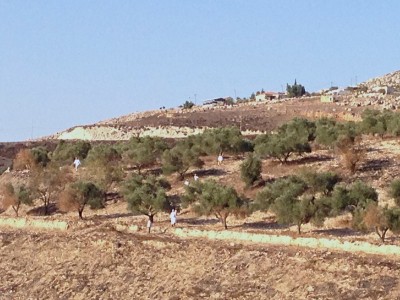 Late Friday night we received a call to accompany a farmer to harvest almonds early the following morning in Kafr Qalil, a village south of Nablus. This is a completely normal activity, harvesting crops when they are ripe and ready-to-pick; however, in Palestine, simply trying to tend to one’s land can be a life-risking event.

At times, international activists and observers accompany Palestinian farmers whose lands are close to settlements and who are at great risk for attack. For some settlers, though a limited minority, international presence can act as a deterrent against violence. For the settlement of Bracha, widely known for its unfettered brutality against Palestinians, there seems to be little that can influence the scope and scale of their attacks.

As soon as we received the call, our team began to scramble a bit- rereading our fellow activists’ reports from a few weeks ago in which the same farmer and his family were violently assaulted by the settlers from Bracha, his almond harvest and donkey stolen. We discussed our plan should the settlers attack again and reassured ourselves that the majority would likely be in synagogue all day, as it was the holiday of Yom Kippur, the Jewish day of atonement.

The following morning we arrived to Kafr Qalil around 6:30 to meet the farmer and international observers from EAPPI. After a few quick rounds of tea, we set off for the almond and olive groves in the south of the village. The farmer’s young son led our convoy, riding a donkey and carrying the tools and bags necessary for the harvest. As we walked and chatted about the general situation in the area, the farmer kept close watch over his son, calling him back anytime he rode too far in advance.

We walked the long, windy hills until we reached the groves where we split into two groups, two of us taking the higher hill and four, including the farmer and his son, taking the lower. As my partner climbed the highest hill to look for trees ready to pick, I waited down below, inspecting those badly damaged by fires set two months before by the settlers. The leaves crumbled in my hands to dust.

No more than five minutes later, in a flash of white, the settlers attacked. Without warning, around 15 men and teenage boys began running through the trees, shouting abuses and hurling massive stones toward the farmer, his son and the internationals present. As I called to my partner to warn him, the settlers also began charging toward me, also throwing stones and screaming. Needless to say, and not at all an overstatement, we all ran for our lives. From the corner of my eye, I managed to spot the farmer ahead of me, struggling to run quickly as he walks with a cane. His son and the donkey were even farther ahead. One of the international volunteers was hit in the back with a stone. The settlers continued chasing us through the trees until we reached an area closer to the village, out of breath, panicked and exhausted. Eventually, when they tired of shouting at us to leave, they settled under a tree, dashing any chance of returning to harvest.

Nearly 20 minutes after the assault, the farmer got in touch with the army commander of the area, who just happened to be sitting in a military jeep on the settler road below the olive grove. The commander insisted that we walk down the steep, rocky terrain to talk to him and explain the situation. After a brief discussion, one of the soldiers arrogantly declared that they “kicked the settlers’ asses back to the settlement,” (conveniently) well after the attack and botched harvest. They assured us that they would stay in the area so that the farmer would be able to work. An international volunteer asked where she could make a complaint about the assault, an inquiry which was met by some laughter from the soldiers who told her she was welcome to make a complaint at the Ariel police department (a futile journey, indeed). 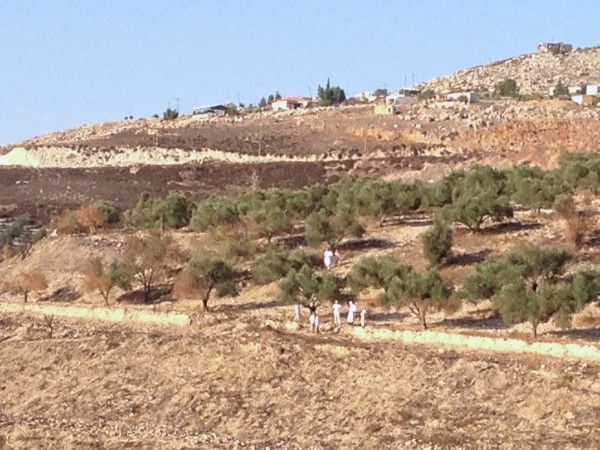 Settlers shouting across the olive and almonds groves (Photo by ISM)

Slowly, we marched back up the hill, listening to the farmers advice to stay quiet and keep our eyes on the horizon, should the settlers return. Unsurprisingly, the army remained quite far away, seemingly unconcerned about the potential for another assault. As we sat under the tree to make a new plan, the farmer told us about all the attacks before, the stolen equipment and donkeys, the many fires that had burned most of the trees that surrounded us. It was hard to understand how a man could remain so calm and kind after a mob of religious nationalist extremists attacked him and his family yet another time.

It felt like a failed day, as not even a single almond was picked. Only the farmer managed to keep a positive attitude. He said that the almonds that we would have harvested are not the most important thing. He came to show both the settlers and the army that this is his land, just as it belonged to his father and his grandfather before him. This is his land and he will continue to plant it and to harvest his crops. This is his land and no violence by the settlers, no violence supported by the army, will ever drive him away.

I feel really uncertain as to what would have happened if the settlers had managed to catch any of us, particularly the farmer and his son. I keep going over the event in my mind, trying to piece together an attack that happened so quickly, but was so extreme in its violence and intensity. In the end, I feel sure that if we ran a bit slower, if the farmer or his son had been caught, the day would have ended quite differently, with someone badly hurt or even killed. It is not uncommon here in Palestine, where farming one’s land must be considered a brave and courageous act.