Dozens injured and hundreds of arrests in intense Hebron clashes

On Sunday 22nd September, heavy clashes took place across Hebron, leading to the injury and arrest of numerous Palestinians as well as the death of an Israeli soldier. Hebron is currently declared a military zone with a curfew imposed and all entrances to the city sealed off. Throughout Sunday evening and night, the Israeli army has been raiding houses, searching all males and arresting hundreds in several neighbourhoods near the scene of the attack.

On Sunday, as part of celebrations of the Jewish holiday of Sukkot, the street outside checkpoint 56 leading to Yatta was closed by Israeli military and border police. Last Friday the army announced by military order that all shops on the street would have be closed and cars would have to be moved between 11am and 3pm, to ensure safe passage for settlers and Jewish visitors for a pilgrimage to what the settlers consider the cave of Otniel ben Knaz, located on said road.

The clashes in Bab Al-Zawiyeh began around 11.30 am when Palestinian youths began to throw stones at the invading Israeli army and border police. The occupation forces shot tear gas canisters, stun grenades and plastic-coated steel bullets at the protesters. Within the first few hours, internationals witnessed border police violently grab two young men from the crowds and drag them into checkpoint 56; it is unknown if they were detained or arrested. Internationals also witnessed several injuries in these clashes, including a Palestinian youth shot with a rubber-coated steel bullet in the back of his head. When his friends proceeded to carry him towards medical treatment, Israeli border police responded by firing more plastic-coated steel bullets at the wounded youth and his friends as they were crossing the street. The clashes in Bab Al-Zawiyeh continued well into the evening and became progressively more violent and volatile. Live ammunition was used against resisting protesters and there are reports of several Palestinian men being treated for gunshot wounds.

Meanwhile, clashes also took place outside checkpoints 209 and 29 in the Quatoum and Salaymeh neighbourhoods. As part of the preparations for the Sukkot celebrations and in order to accommodate the large flux of Jewish tourists, the Israeli military had moved the roadblocks outside these two checkpoints approximately 200 metres further down the road and re-directed Israeli tour buses down this route. This move effectively enlarged area H2 under Israeli military control and disrupted life for Palestinians, as well as constituting provocation and humiliation. During the riots, stone-throwing youths and children were confronted with large amounts of teargas, sound grenades, rubber-coated steel bullets and several rounds of live ammunition shot by the Israeli military, who also invaded several roofs of Palestinian houses to fire from there. During the clashes, one man was beaten by border police, and two youths were arrested and released after about an hour.

At around 6pm, international activists saw soldiers who had been shooting at the protestors suddenly run back up the road towards checkpoint 209 (Abu Rish/Quatoum). When they followed them, they saw a soldier lying on the ground unconscious and bleeding from his neck. After attempts to resuscitate him failed, the soldier, identified later as Gabriel Kobi, was rushed to a Jerusalem hospital in a helicopter, where he died of his wounds sustained. The Israeli army claims he was hit by a bullet shot by a suspected Palestinian sniper, however none of the international activists present at the scene heard any gunshots.

Following the soldier’s injury and later death, hundreds of soldiers invaded the neighbourhoods surrounding checkpoints 29 and 209, conducting searches throughout the evening and into the night, apparently in an attempt to find the sniper they claim killed the soldier, and in retaliation for his death. International activists witnessed the army combing through house after house, forcing out all males above the age of 16, and frisking them one by one. They also saw a group of about 50 detained men with their hands behind their heads being marched down towards checkpoint 29. International activists also accompanied an ambulance which took a woman in labour to the hospital after it had initially been blocked by the army. Meanwhile, clashes continued in the area, and the army heavily used rubber-coated steel bullets and live ammunition against stone-throwing youth.

Hebron has been completely sealed off, with all entrances to the city being controlled by the army, and a curfew imposed within Hebron. Tomorrow, 50,000 Jewish settler visitors were expected to descend upon Hebron for Sukkot celebrations and a music festival, according to the settler community’s spokesperson; however the events of today will most likely lower this number. In any case, it is clear that Monday 23rd September will be yet another intense day for Palestinians, as they face high levels of army violence and settler attacks in retaliation for the soldier’s death. 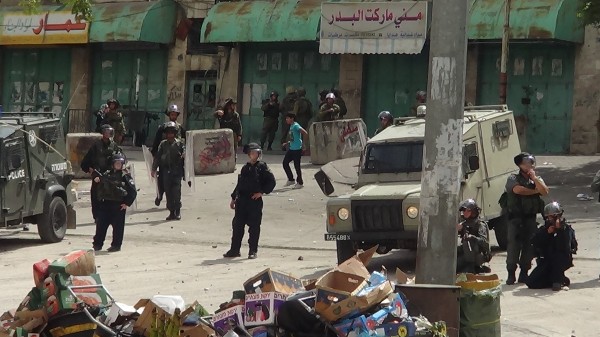 Israeli soldiers and border police before the clashes began