Call to action: Join ISM for the 2013 Olive Harvest Campaign 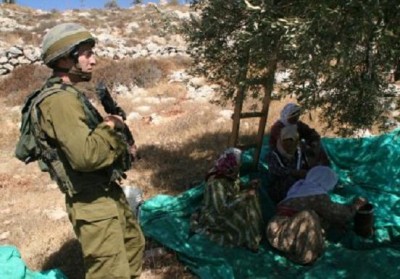 Israeli soldier stands next to Palestinian farmers harvesting their olives

At a time of regular settler violence in the West Bank, the International Solidarity Movement (ISM) is issuing an urgent call for volunteers to join us for the 2013 Olive Harvest Campaign at the invitation of Palestinian communities.

The olive tree is a national symbol for Palestinians. As thousands of olive trees have been bulldozed, uprooted, burned and destroyed by Israeli settlers and the military – according to the UN settlers alone destroyed or damaged over 7,500 trees just in 2012 – harvesting has become more than a source of livelihood; it has become a form of resistance.

The olive harvest is an annual affirmation of Palestinians’ historical, spiritual, and economic connection to their land, and a rejection of Israeli efforts to seize it. Despite attempts by Israeli settlers and soldiers to prevent them from accessing their land, Palestinian communities have remained steadfast in refusing to give up their olive harvest.

ISM volunteers join Palestinian farming communities each year to harvest olives, in areas where Palestinians face settler and military violence when working their land. Your presence can make a big difference, with Palestinian communities stating that the presence of international volunteers reduces the risk of extreme violence from Israeli settlers and the Israeli army.

We support Palestinians’ assertion of their right to earn their livelihoods and be present on their lands. International solidarity activists engage in non-violent intervention and documentation, practical support which enables many families to pick their olives.

The campaign will begin mid October and will last around 5-7 weeks.  We request a minimum 2 week commitment from volunteers but stress that long-termers are needed as well. We ask that volunteers start arriving in the first week of October, so that we will be prepared when the harvest begins.

The ISM will be holding mandatory two day training sessions which will run weekly on Wednesdays and Thursdays. Please see the join ISM page or contact palreports@gmail.com for further information.

In addition to the Olive Harvest Campaign, volunteers can also participate in regular ISM activities in support of the Palestinian popular struggle.

Join us in our solidarity with the Palestinian resistance at this crucial time of year!