On the evening of Sunday, July 14, in the old city of Hebron two Palestinian children named Mohammed and Ahmed, both aged 13 years old, were arrested. Though joining a wave of child arrests in Hebron during the last weeks, the arrests of the two boys stand out because of the massive number of soldiers and police actively participating. 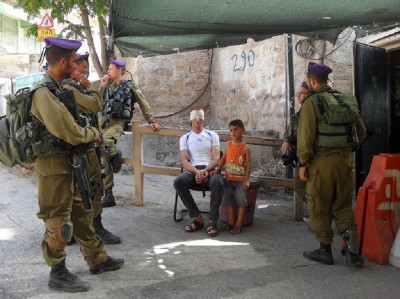 5-year-old Wadia arrested with his father, also blindfolded, by Israeli focers in Hebron (Photo by ISM)

The first boy, 13 year old Mohammed, was taken from his family home in the Israeli controlled H2 area of Hebron, home to 31,000 Palestinian people and approximately 500 illegal Israeli settlers. Allegedly the arrest was made because Mohammed threw a stone at Israeli soldiers patrolling the streets, though no evidence of this has been made public to international observers who witnessed soldiers invading Mohammed’s home and leading him away to Beit Romano Military base. The second boy, named Ahmed and also 13 years old, was taken from one of Hebron’s market streets, situated in H1, an area that is supposed to be controlled fully by Palestinian police forces. Sidestepping this agreement, the soldiers invaded H1, grabbed Ahmed and brought him with them back into H2, claiming he had thrown a tomato at a nearby settlement.

Both individual arrests were carried out by more than five Israeli soldiers, but as events rolled the number progressed to more than 30 heavily armed members of the occupying forces. The arrest of Ahmed led to outcries in the market, with Ahmed’s mother demanding the soldiers on the wall separating the two areas to give back her son. The soldiers responded by sending more than 30 soldiers to the wall, bringing with them both live ammunition and several teargas grenades, threatening to shoot these into the mass of assembled people gathered on the other side of the wall. The situation escalated as armed settlers joined the soldiers, harassing international observers.

Finally, an hour later, a visibly shaken Ahmed was taken through the mass of settlers and military personnel and released back into H1 to his waiting family. Mohammed had to endure further dehumanizing punishment as he was taken to the Police station outside Ibrihimi Mosque. This was where an Israeli police officer lied to internationals present, stating the boy would be released and that those present could “trust him”; in fact Mohammed was transferred to Qiryat Arba police station and held until his family could make their way there to pay a fine of 500 NIS for his release.

The city of Hebron has experienced a wave of child arrests during the last weeks, often violating Israeli military law stating that children under the age of 12 cannot be arrested, as in the case of 5-year-old Wadia[i]. Though both Ahmed and Mohammed are 13, Palestinians complain that this law, giving Israeli occupation forces the right to arrest children from the age of 12, is only ever enforced for their children and not for settler children. On Sunday night in Hebron this proved true, as settler children attacked internationals by throwing a stone on the scene before the eyes of Israeli soldiers without consequences.