On July 9th at around 4pm in occupied Hebron, Israeli soldiers arrested and held a five-year-old boy in their military base along with his father. They kept the father handcuffed and blindfolded, and transferred them to the checkpoint separating the Israeli and Palestinian controlled areas of Hebron – Checkpoint 56 – interrogating both of them while they waited for District Coordination Office (DCO) – the liaison for the Palestinian Authority. 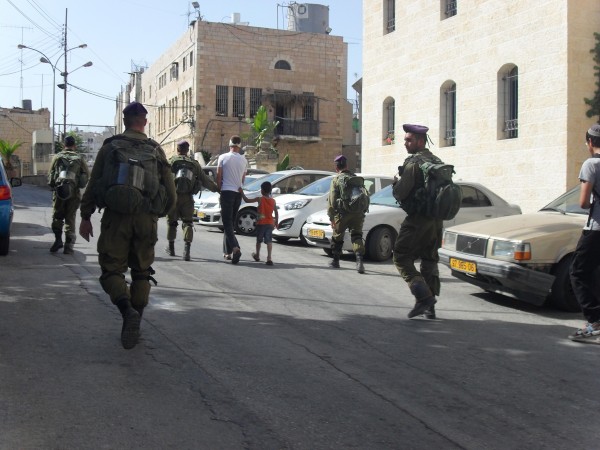 The young boy, Wadia, allegedly threw stones at soldiers, which precipitated his arrest.  Bystanders say that Wadia threw a stone at a dog and a nearby soldier accused the Wadia of throwing stones at her.  The soldiers handcuffed and blindfolded Wadia’s father, Abu Karam Maswathi, and transported both of them to the nearby military base where they were briefly held and questioned – this in spite of the fact the children under 12 cannot be arrested and charged with a crime under Israeli law[i]. 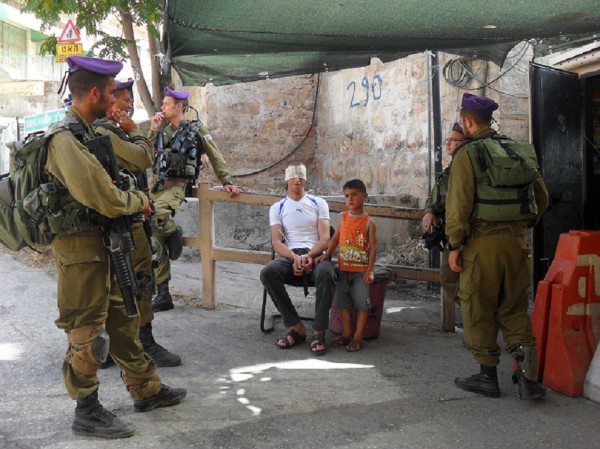 Abu Karam Maswathi, blindfolded and hadcuffed with his son, surrounded by soldiers (Photo by ISM)

While the soldiers led the father and son from the military base, Abu Karam was still blindfolded and handcuffed even though he was not technically being detained, which is said to be illegal under Israeli law. The two were led to Checkpoint 56 to await their release to the DCO, which is standard procedure for child arrests.  However, today they were surrounded by around ten soldiers, who could be seen interrogating the detainees and trying to prevent internationals from filming.  An Israeli military commander later arrived on the scene and reprimanded the soldiers for handcuffing and blindfolding Abu Karam in front of the international human rights workers because it’s “bad PR.”

All this for a 5-year-old child allegedly throwing a stone.