In the early hours of the morning of Sunday June 30th 2013, Sharif Arafat, a 30-year-old Palestinian fisherman, was injured on a fishing boat off the coast of Soudania, North of the Gaza Strip. 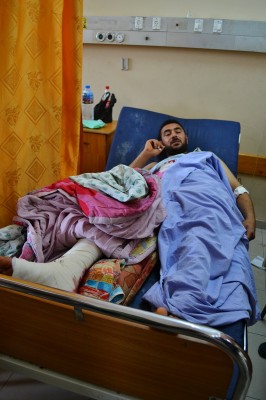 The captain of the boat, Nafiz At Habeel, reported that during the night the strong wind had pushed the vessel about 6 miles from the coast of Soudania. Around midnight an Israeli military navy ship approached and then retreated. In the early hours of the morning, at around 3:30am to 4:00am, the fishermen threw their nets into the sea. Once again, an Israeli navy ship approached the fishing boat and this time started shooting. Nafiz told us that the fishermen tried to hide in order to avoid the bullets, while Sharif Arafat ran to the side where the fishing nets were. Sharif, an inexperienced fisherman, did not know how to escape in the event of gunshots by the army. One of the nets became caught up around his leg.

“Sharif was terrified, his ankle was trapped”, Nafiz said. As he couldn’t swim, Sharif clung to the boat as not to fall into the water, while the nets pulled him down. His ankle was severely fractured and broken and he fell into the water. Nafiz told us that he had tried to pull in the nets with the engine. “These nets float – I cried at Sharif to cling to a ball of the fishing net”, said Nafiz. Sharif was then pulled on board and taken to the port of Gaza City on a ‘hasaka’, a small boat that usually accompanies the vessels.

During the incident the fishermen had relit the lights of the boats, which usually go off when they cast their nets. The Israeli navy has since moved away, probably because the soldiers had realized that something serious had happened.

We met Sharif Arafat at Shifa hospital in Gaza City, where he was hospitalized following the accident. The hospital report states that Sharif had a partially amputated right ankle due to trauma. 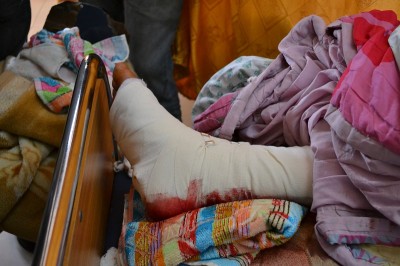 Sharif Arafat is not a professional fisherman. “I went fishing only because of the economic situation, I cannot even swim”, said Sharif, who had begun to fish only 5 months earlier. Sharif is married, has one child and his wife is pregnant with a second child.

Sharif was frightened by the idea that his foot could be amputated. His brother Alaa, next to him in the hospital, was in tears. The same evening Sharif was transferred urgently to a hospital in Israel to be operated on, thanks to the intervention of the Palestinian Center for Human Rights who called for an acceleration of the procedures such was the emergency. In the Gaza Strip such surgery was not available.

We are still waiting for news on the conditions of Sharif Arafat.

Israel has progressively imposed restrictions on Palestinian fishermen’s access to the sea. The 20 nautical miles established under the agreements of Jericho in 1994 between Israel and the Palestine Liberation Organization (PLO), have been reduced to 12 miles under the Bertini Agreement in 2002. In 2006, the area allowed for fishing was reduced to 6 nautical miles from the coast. Following the Israeli military offensive “Cast Lead” (2008-2009) Israel has imposed a limit of 3 nautical miles from the coast, preventing Palestinians from access to 85% of the water to which they are entitled according to the Jericho agreements of 1994. 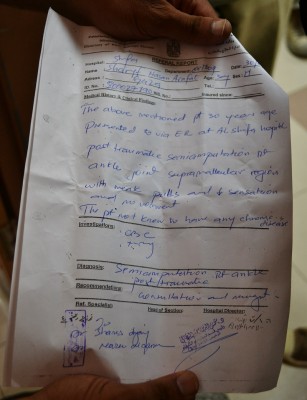 We join the call of the fishermen and ask our governments to press Israel to stop attacking and arresting Palestinian fishermen and to allow them to fish freely.