The latest episode of endless settler violence in Qusra

The night of Saturday, 15 June, Israeli settlers continued a tradition of violence and harassment against the Palestinian village of Qusra. 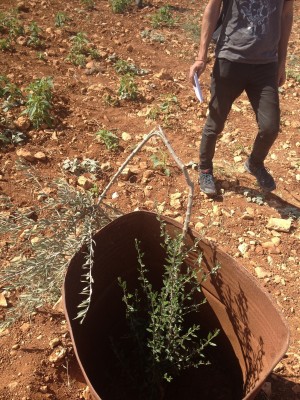 Late at night, settlers from Esh Kodesh, the nearby settlement, trespassed upon Palestinian private property, damaged five olive trees, destroyed part of a building and took two support poles from it. Several olive trees had trunks completely severed and some had branches cut off. Twenty such buildings, which serve agricultural purposes, were donated by a foreign European government to Qusra in May 2013. Because the houses are located in Area C (under complete Israeli military and civil control), they were declared illegal by Israeli authorities last week. A legal decision regarding their demolition is set to be decided in an Israeli court on an unknown date.

Qusra, a Palestinian village in Nablus Governorate of approximately 4,500 people that is hundreds if not thousands of years old, is no stranger to settler violence and harassment. The most infamous incidences of settler violence in Qusra occurred in September 2011, when a mosque in Qusra was vandalized and targeted for arson by extremist Israeli settlers, gaining international attention. Later the same month, a group of settlers invaded the village and when they met resistance, Israeli soldiers intervened, shooting and killing Essam Badran, a 35-year-old Palestinian man.

Last February, several people from Qusra were injured and hospitalised following a settler attack in the village. A sixteen year-old boy was shot in the forehead with a rubber coated steel bullet by soldiers and had to go through surgery. Additionally, Helmi Abdul Azeez Hassan (26) was shot with live ammunition in the chest by settlers and spent nine days unconscious in Hadassa hospital in Israel.

Despite all this, the people of Qusra will continue to resist settler harassment and violence and have plans to build a school and mosque in honor of the martyr Essam.