In the morning of June 22nd, Palestinian, international and Israeli activists marched to the Israeli occupation military checkpoint blocking the West Bank from Jerusalem. Upon reaching the Israeli occupation roadblock, they were stopped by soldiers who violently prevented them from passing through the checkpoint. In reaction, the Palestinian activists prayed at the checkpoint, demonstrating their right to both freedom of movement within their own land, and freedom to worship in Jerusalem. 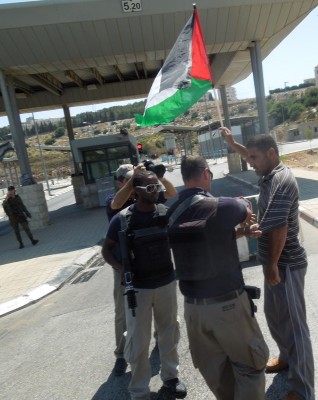 Protester being harassed by Israeli military in front of checkpoint (Photo by: ISM)

The activists arrived on the Bethlehem road, driving towards the military checkpoint separating south West Bank from Jerusalem. Around fifty meters from the checkpoint, they exited vehicles and marched towards the occupied land on the other side of the checkpoint manned by Israeli occupation military. The activists wore kuffiyehs and carried Palestinian flags, carrying a sign reading “Our land is our right”, “Free”, “Justice.”

Demonstrators were immediately confronted by Israeli occupation military personnel, who refused them passage through the checkpoint and tried to push them back. Palestinian activists were grabbed violently by soldiers, who pulled at their clothes and shoved them out of the road and away from the area.

However, activists refused to back down and instead chanted slogans and spoke about their right to freely enter occupied Jerusalem. An Israeli occupation police car and several military jeeps arrived to further repress the nonviolent demonstration. The violence from the soldiers continued and escalated when activists were threatened with pepper spray. In reaction to this, the Palestinian protesters began praying on the Bethlehem side of the checkpoint.

Following the prayer, the activists stated that they were leaving, but that they would return soon and that the next time they prayed it would be in Jerusalem.

This demonstration aimed to highlight the human rights abuses that the Palestinian people are subjected to every day because of the occupation. Restriction of movement is widespread across the West Bank, with permission from the Israeli occupation authorities being demanded for Palestinians to be allowed to travel their own land. This permission is granted very rarely, and usually excludes people aged 18-45. 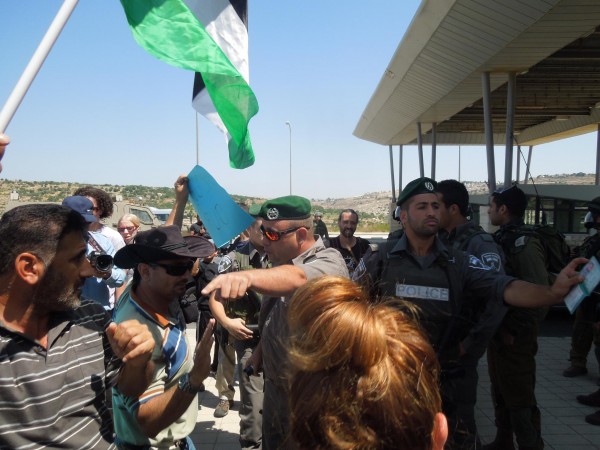 In Islam and Christianity, Jerusalem is one of the primary religious sites. According to the Universal Declaration of Human Rights, “Everyone has the right to freedom of thought, conscience and religion…to manifest his religion or belief in teaching, practice, worship and observance.” This human right is blatantly denied through acts committed by the Israeli occupation authorities and military every day.

The presence of international and Israeli activists also highlighted the apartheid policies of Israel, as they would have been permitted to pass through the checkpoint and enter Jerusalem, had they not stood in solidarity with their Palestinian friends, who were not allowed passage. During the demonstration, many Israeli colonists’ cars were granted access easily to the stolen Palestinian land. 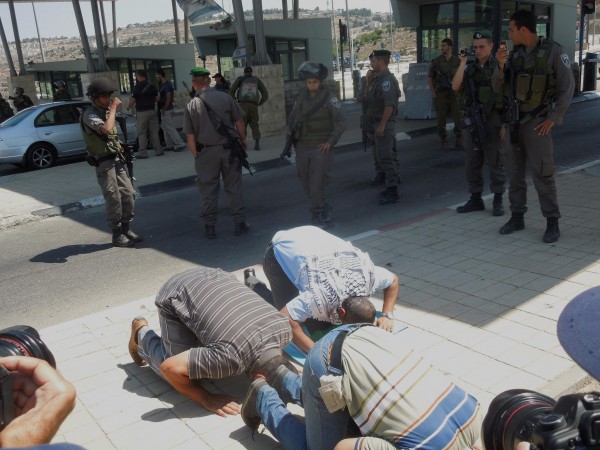 Protesters praying in front of the checkpoint to occupied Jerusalem (Photo by: ISM)