Activists demonstrated internationally on Friday as part of efforts to focus attention on Israel’s aggression against Palestinians in Jerusalem. 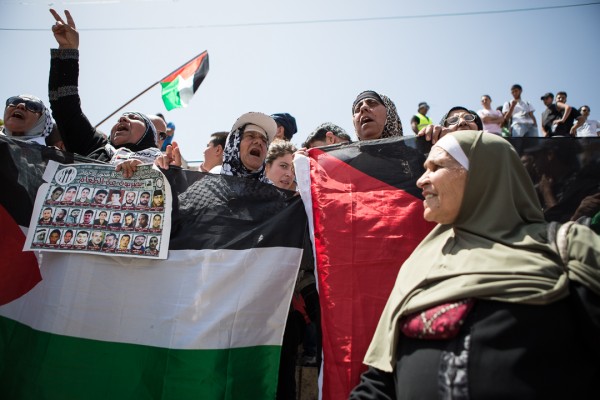 Global March to Jerusalem participants called for solidarity with political prisoners, an end to the occupation and for national unity. (Dylan Collins)

Known as the Global March to Jerusalem, the protests marked the 46th anniversary of theNaksa (setback) — Israel’s 1967 occupation of the Gaza Strip and West Bank, Syria’sGolan Heights, and Egypt’s Sinai Peninsula. Whereas the Sinai was returned to Egypt in 1982, the other territories remain under Israeli occupation.

“Gaza deserves all the support we can give,” said Zaher Birawi, Global March to Jerusalem’s international committee member and spokesperson. Birawi arrived in Gaza last week with the aid convoy Miles of Smiles 21’s international delegation for the event. “But it should be in the context of fighting the occupation, with a clear vision toward Jerusalem.”

Birawi, who is a London-based television producer from Asira al-Shamaliya in the West Bank, added, “Gaza alone is not the issue … Jerusalem, and the whole occupation, is the issue.”

While associated with Islamic movements, primarily in Palestine and other Arab countries, the event does not restrict its appeal or participation, Birawi said. Jerusalem, he said, “is not a Palestinian duty only. It is for Palestinians in a political context, maybe. But in a cultural and religious context, Palestinians are not the owners of the city. It is for all people and all religions, and should be protected by the whole world.”

This year’s march came amid rising tensions between Jerusalem Palestinians and Israeli occupation forces. Israeli soldiers and settlers have repeatedly invaded the al-Haram al-Sharif complex, which contains the Dome of the Rock and al-Aqsa Mosque.

And a 4 May attack by Israeli police on worshipers celebrating Holy Saturday outside the Church of the Holy Sepulchre prompted a rare public rebuke by the heads of Christian churches in Jerusalem (“A statement regarding police measures on Holy Saturday,” Latin Patriarchate of Jerusalem, 13 May 2013).

Israel’s repressive measures don’t only affect Palestinians’ freedom to worship in Jerusalem. Israeli evictions of Palestinians and construction of new settlements and their infrastructure, as well as economic measures targeting Palestinians, continue. “The main reason for these projects is to actually cut off Jerusalem from the West Bank and make a connection between the Maale Adumim settlement and Jerusalem,” The Electronic Intifada contributor Maath Musleh said in March.

The movement urging boycott, divestment and sanctions (BDS) against Israel has targeted many of the companies that support Israel’s occupation and settlement of Palestinian land in Jerusalem. Some, like the French corporation Veolia, have suffered painful losses as a result. Others, such as the British-Danish security company G4S, face growing campaigns.

In Jerusalem, nearly a hundred Palestinians, accompanied by a handful of international activists, assembled at the Damascus Gate in the Old City following Friday prayers last week.

Although the demonstration was peaceful, a larget contingent of Israeli police quickly moved to block exits in the Damascus Gate area.

Demonstrators of all ages were draped in Palestinian flags, and chants were led by a group of older women. They called for solidarity with political prisoners, an end to the occupation and for national unity. “One homeland from Gaza to the West Bank,” several chanted.

As the march began, Israeli officers on horseback cut the line in half. Dozens of police in riot gear immediately poured into the area.

Before the march could reach some 50 meters, the police officers attacked several protesters and bystanders alike. A female foreign national was snatched up, handcuffed and stuffed in the back of a police car, though it was not clear if she was part of the demonstration.

In one instance, an Israeli officer pushed a Palestinian photojournalist to the ground. Once he hit the pavement, he was kicked several times by officers until fellow journalists and demonstrators helped lift him up and drag him to safety.

Making no distinctions, officers on horses repeatedly charged in the direction of civilian bystanders, press and Palestinian medical services.

Seventeen-year-old Muath Abu Irshaid was arrested for “taking part in an unlicensed demonstration,” according to Raja Eghbariya of the secular Palestinian nationalist movement Abna al-Balad, which sent a bus of participants to Jerusalem.

In the northern Gaza Strip, a large demonstration was held at the Erez checkpoint in Beit Hanoun at the boundary with Israel. Buses from as far south as Rafah — on Gaza’s border with Egypt — streamed into the protest site after Friday prayers as protestors mingled on a road stretching from a stage near the closed crossing.

“The whole world must learn about the settlements in Jerusalem,” said government worker Mahmoud Kamel, who attended the march with his eight-year-old son Obeida. “This is the first thing. There are no reasons for the policies against civilians in Jerusalem. And they are taking place on land that has been ours since before our grandfathers and grandmothers.”

In Beit Hanoun, members of Hamas and Islamic Jihad held the majority of partisan flags and signs. Members of other factions also participated, albeit in smaller numbers.

“We want peace, freedom and security,” said Mahmoud Rouka, a Palestinian Democratic Union (FIDA) activist. “We want to be able to travel across our own country. The Global March to Jerusalem is a time for Palestinian people here, in the West Bank, in ‘48 [present-day Israel], and in other countries around Palestine to look toward Jerusalem.”

Palestine Liberation Organization member parties, including Fatah, endorsed the Beit Hanoun gathering but their members kept a low profile during it. In the West Bank, Fatah-affiliated media announced and reported local events.

Organizers suggested that Fatah’s increased participation this year may have stemmed from the success of last year’s march, as well as expectations of large protests inAlexandria and Cairo, where Egypt’s governing Muslim Brotherhood mobilized alongside the al-Asala, al-Nour, and al-Wasat political parties.

Compared to last year, the turnout was notably smaller in Jerusalem. Eghbariya said that “some activists, political parties, and even the Islamic movement [in Israel] declined to participate because of a rumor that the event was organized by Hamas and the fear that Israel would respond harshly.”

Dr. Sarah Marusek, a Global March to Jerusalem international committee member and spokesperson from Brooklyn, New York, who also arrived in Gaza with Miles of Smiles 21, confirmed these concerns. “There was a lot of fear to organize in Jerusalem — it’s very difficult right now, because there have been so many arrests in Jerusalem,” she said. “Many of the student leaders who were working with us before are now in Israeli prison. This political situation has made it hard to mobilize.”

One of the organizers of the West Bank events last year, according to Marusek, wasHassan Karajah, the 28-year-old youth coordinator of the Stop the Wall campaign who was arrested by Israel in January.

Marusek added that smaller numbers across the region stemmed from organizers’ late start planning this year’s events, due to the conflict in Syria.

Tamer Khalefa, a local organizer of the Global March to Jerusalem, said the march would be staged again next year. “It’s important to mark the anniversary not just because of daily aggression at al-Aqsa [mosque] but also because of the general situation in Jerusalem,” he said. “This includes home demolitions, anti-Arab discrimination, land theft and all human rights violations.”

Clashes between protesters and the Israeli military also occurred across the West Bank, particularly in areas near Bethlehem and Ramallah.

In Bilin, a village featured in the acclaimed 5 Broken Cameras documentary film, Palestinian, Israeli and international activists were attacked by Israeli forces who fired rubber-coated steel bullets, tear gas and stun grenades near Israel’s wall in the West Bank.

Contacts established during the 2012 Global March to Jerusalem made it easier to mobilize quickly this year, she said. “This is our second GMJ, so we had already created a structure of networks and relationships. We already had key contacts in place. We have national committees in Palestine, in Gaza and the West Bank.”

“We try to choose people who can work with all the parties” as local coordinators in the Middle East, she said. “It’s an international movement, but it’s also very much Palestinian-led. It can be a struggle working with Europeans and North Americans who are used to working on projects that are more activist-led.”

“We are a peaceful movement, and we expect Israel’s response to be violent,” Marusek said. “But nonviolence is the path we chose.”

Joe Catron is a US activist in Gaza, Palestine. He co-edited The Prisoners’ Diaries: Palestinian Voices from the Israeli Gulag, an anthology of accounts by detainees freed in the 2011 prisoner exchange, blogs at joecatron.wordpress.com and can be followed on Twitter @jncatron.

Patrick O. Strickland is a freelance journalist whose writing has appeared in Al Jazeera English, Al Akhbar English, The Electronic Intifada, Middle East Monitor, Palestine Monitor, and others. Follow him on Twitter @pstrickland.