I am an ISM activist living in the occupied city of Hebron. I arrived home late in the evening of Friday, June 14, and outside my door some of the neighborhood kids had built a small fire and were cooking corn. They tried to sell me a piece for a couple of shekels but I was more interested in sleeping at that point of the night. I put on some music and started cleaning up the apartment, but then I heard yelling outside my house. I looked down and saw an armed settler and a Palestinian man arguing loudly. Then I saw two Israeli soldiers escorting the settler from the scene. As I was home alone, I didn’t go down myself but called two other organizations, CPT and EAPPI, to help monitor the situation. Over the next few minutes I heard more yelling and glass breaking and saw more soldiers arriving at the scene.  I didn’t see any arrests. I also saw that the corn and the materials the kids built the fire with were scattered all over the place and someone was cleaning them up.

When CPT and EAPPI arrived, we patrolled the area, which was at this point quiet but filled with more soldiers than usual. We were pleased to find that our neighbor Hani and his family were all safe, and then went visit Palestinian human rights group Youth Against Settlements. There one of our activists friends Jawad finally had some answers for us. He took us to the Abu Haqel house, and acted as a translator for us as we interviewed Abu Hussein. This is what he said. 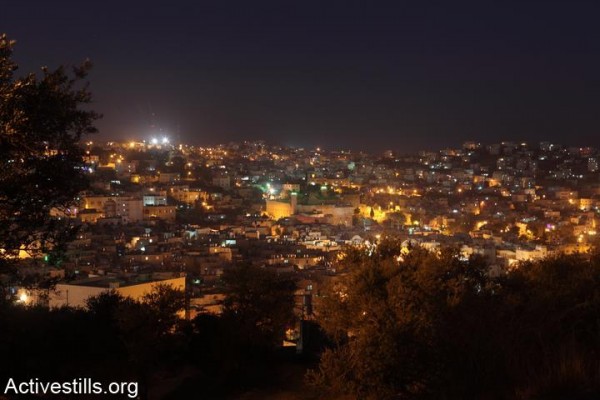 View on the old city of Hebron from Tel Rumeida (Photo by: Activestills)

When the kids were cooking the corn and selling it for about a shekel apiece, an angry settler man came up to them. He cocked his M16 and chased the kids away, shouting that if anyone took a shot at his son, he would kill that person. He then came back and spilled the corn out in the street. Abu Hussein heard this and came down and was very angry about what the settler had done. The settler shouted that Abu Hussein and those kids must leave the area, or he would burn their houses and anyone inside. Abu Hussein said that this is his home – he lives right above my house – and said the settler should leave. Israeli officers arrived and escorted the settler away from the scene and told Abu Hussein to leave, threatening to arrest his children and take them in for investigation. Supposedly a settler kid was harassed earlier in the day. Abu Hussein told them that if they want to know what happened, they should question the soldiers who are in the area all day or use their many security cameras, rather than arresting children. Abu Hussein’s son, who was in the room while we spoke to Abu Hussein, said he hadn’t seen the settler children all day.

Our neighborhood of Tel Rumeida, part of the Israeli-controlled H2 district of occupied Hebron, is the site of frequent settler attacks on Palestinian families. In most cases the Israeli soldiers look on and do nothing to stop the violence. The continued attacks are seen by some Palestinians as part of an overall effort to make life as difficult as possible for Palestinian residents so they will choose to move out of the area. However, to our knowledge none of the Palestinian residents of Tel Rumeida are giving in to Israeli pressure any time soon. This is their home, after all.