Saturdays under the settlements

Saturday is supposed to be a holy day for the Jewish settlers of the illegal colonies in the West Bank; many don’t work, they don’t turn on electrical appliances, they don’t drive cars. But some of the violent and Zionist among them still allow themselves one activity – attacking and harassing Palestinians. 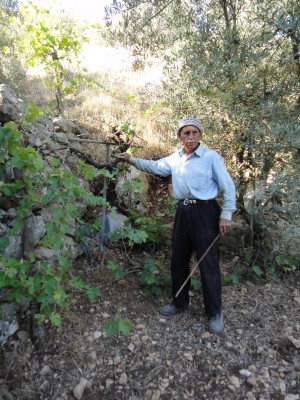 This Saturday, four international volunteers accompanied a farmer and his family from the town of Beit Ummar to their land, which is in the valley directly underneath the settlement of Bet Ayin, notorious for violent attacks against Palestinians, especially on Saturdays. The family had asked for an international presence to act as a deterrent for the settlers and also to speed the farming, as the quicker we could bring in the harvest, the less time the family would be at risk on their land. This day, thankfully, there were no settlers running down the hills throwing rocks at the farmers, and there were no helicopters bringing Israeli military to “protect” the attackers, as has happened in the past (needless to say, they don’t come to protect the Palestinians who are being attacked). We picked enough plums to fill all of the boxes that the farmer had brought and these were loaded onto a donkey to be taken to market.

It was after we were finished – and after we had been given one (or two, or three) of the delicious plums by the farmer – that we were taken on a tour of the valley and the family’s land. Although it is still lush, well tended and green, there was also destruction visible everywhere. Fruit and olive trees had been hacked down leaving just stumps, branches of figs had been half torn off, grapevines were ripped from their supports. In addition several newly planted young olive trees had been uprooted.

The farmer walked us through, pointing out each and every plant which had been killed over the last couple of years. Each had been sown with love, hope and resistance – and each had been torn down by the settlers. At every plant and tree the farmer paused and told us to “see, see what they did! It is so bad”. It was clear that every new piece of destruction was a blow to him. 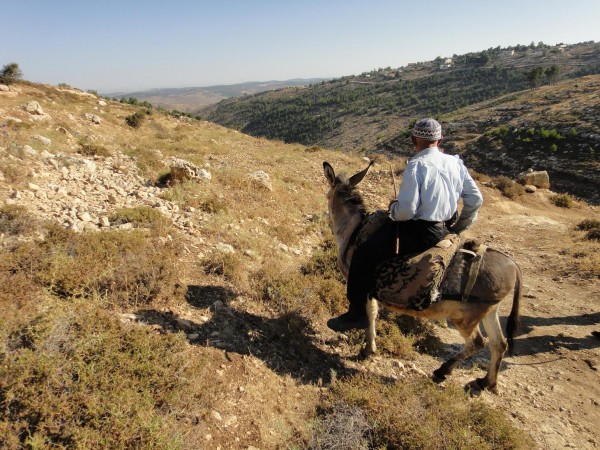 Bet Ayin settlement visible on the hill (Photo by: ISM)

He also showed us the river running through the valley and how it was polluted, poisoning some of the trees and causing weeds to grow wild, blocking access across the river to the land on the other side. The pollution comes from the looming settlement of Bet Ayin. When his English was limited, the farmer acted out the attacks to which he had been subjected – showing us marks on his head where the settlers had beaten him.

But despite all of this, the farmers will continue working their land, each tree a symbol for their resistance and each harvest a step towards the day when they will be able to farm their land on Saturdays – and every other day – without international accompaniment and without having to watch the hills for settlers.