Man wounded by Israeli gunfire in the southern Gaza Strip

On the morning of Monday, 10th June, a Palestinian man was injured by Israeli army fire while working in the area of ​​Sufa, southern Gaza Strip, near the barrier with Israel. 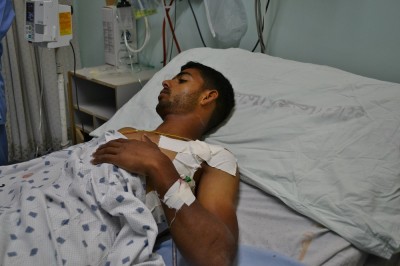 Hadayed Abu Amer, 20, was picking up rocks and stones to be sold as building material along with his brothers Yasser and Saher. The three had gone to work at 6:00 am aboard a tuk-tuk.

An Israeli military jeep approached them so they left the area, but returned soon after to continue working. At this point the soldiers started shooting in their direction. At about 7:00am the three men, who were about 30 meters from the barrier that separates Israel from the Gaza Strip, tried to flee to avoid being hurt, but Amer was hit in the shoulder by one of the bullets.

Amer and one of his brothers fled while the third followed them with the tuk-tuk. Amer was subsequently transported to the hospital.

The three men earn 80 shekels for a day’s work, of which 15 shekels usually goes to the driver of the tuk-tuk. In practice the men earn about six euros each daily, working every day in an area of extreme danger.

Amer is still in the intensive care unit of the European hospital just south of Khan Younis. He said that the soldiers had also shot at he and his brothers two weeks previously but they had been able to escape.

Dr. Ihab Alassal reported that the bullet entered and exited the body of Amer. His condition is now stable. He reported an accumulation of blood in the pleural space, that is, the space between the lung and the chest wall. Dr. Alassal added that Amer is now under observation and being monitored for vascular access and blood pressure. He added that if his condition worsens, Amer could undergo exploratory surgery. 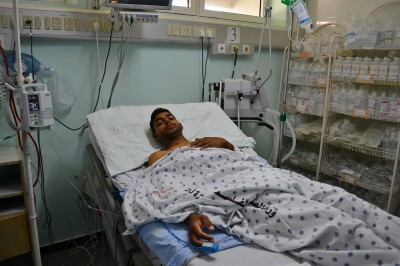 Amer in the hospital (Photo by: Rosa Schiano)

Amer’s family consists of ten members: two parents, two daughters and six sons. One of the sons, Mahmoud, 24, works as a barber, while three male children collect stones to be sold. The rest are unemployed. They live in Khan Younis, in an area called Al Junra, in the southern Gaza Strip.

Mahmoud was with one of the brothers outside the intensive care unit. He constantly repeated “I’m desperate,” talking about the harsh economic conditions prevailing in his family. He dreams of leaving Gaza, to move to Italy or elsewhere, in hope of a better future.

“We will never return to pick up stones,” said Yasser whose eyes told everything about the fear that this attack had brought about.

The siege that Israel has illegally imposed on the Gaza Strip has produced a failing economy and then on another level mass unemployment. The limited amount of construction material entering through the Karm Abu Salem crossing (Kerem Shalom) forces Palestinian companies to require people to collect stones for the construction of buildings. The majority of these stones are found near the border areas – where Palestinian buildings have been destroyed or bulldozed by the Israeli army.

The arrangements for the ceasefire of 21st November 2012 established that the Israeli military forces should “refrain from hitting residents in areas along the border” and “cease hostilities in the Gaza Strip by land, by sea and by air, including raids and targeted killings.”

However, Israeli military attacks by land and sea have followed from the day after the ceasefire, and Israeli warplanes fly constantly over the sky in the Gaza Strip. In the border areas four civilians have been killed since the end of the “Pillar of Defense” military offensive, and at least 90 civilians have been wounded.

These attacks against the civilian population of Gaza continue to occur, yet are met with silence by the international community.

You can read International Action for Palestine’s report here.