Mahmoud Mohammed Zayed, 25, and his brother Khaled, 24, are two young fishermen of Gaza. At about 9pm on Sunday, May 19th 2013, they were fishing on their small rowing boat in the waters north of the Gaza Strip, in front of the beach of Beit Lahiya. They were arrested after Israeli naval forces attacked fishermen with gunfire, and were taken to the port of Ashdod in Israel. Israeli soldiers confiscated their boat and nets, and released the two fishermen in the morning of the following day, on Monday, May 20th.

We met Khaled Mahmoud and his brother in the office of UAWC (The Union of Agricultural Work Committees), which deals with projects and initiatives to support farmers and fishermen in Gaza and the Occupied Territories. Mahmoud’s face was familiar to me.

As I tried to remember where we had met, he told me he had seen me in an UNRWA school  during the military offensive in November 2012, when the Israeli air force launched thousands of leaflets ordering people to leave their homes. Hundreds of families living in the north of the Gaza Strip had been forced to leave their homes and seek refuge in UNRWA schools in Gaza City. Gathered on the floor on mattresses and blankets, they were united in fear. The house of Mahmoud went on to be damaged by bombing.

Yet I remembered seeing Mahmoud on another occasion. Here, in February, 2012, I met another member of his family, Ahmed Zayed, who was also arrested by the Israeli navy while fishing in Northern Gaza waters. 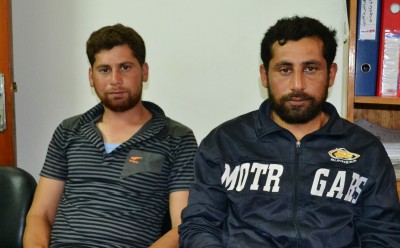 And when I think of the fishermen of Beit Lahiya, I cannot forget the face of Abu FahmyRyash, 23 year old fisherman killed on 28th September by an Israeli soldier while he was fishing on the beaches. Killed by expanding dumdum bullets his internal organs had been destroyed. I asked Mahmoud if he had known him. Mahmoud told me that they had often fished together.

And so here are the mixed memories, common experiences that unite us in a deep feeling – a brotherly bond.
So I think of the lives of these people, marked by mourning, from wounds, from everyday resistance, the quest for freedom, the struggle for the right to life.

Mahmoud started to tell us what happened on Sunday: “We went fishing around 5:30pm, with our small rowing boat. We were about half a mile away from the beach of Beit Lahiya, along with other boats. At 9pm two speedboats started attacking us and the other fishermen with shots fired. The attack lasted almost an hour. Then the soldiers came close to our boat, started to turn around us to create waves and they shouted to stop the boat. We replied that we would be back at home. There were 5 men on each boat.We fell into the water, then we got back on board. Khaled was feeling ill. Then two soldiers arrested us.”

“The strange thing – he told Mahmoud – is that the soldiers have asked me why my brother Khaled was with me on the boat. Khaled usually fishes on another boat. But when he finished his work he came with me to help me.” The actions of soldiers help us to understand how they maintain control of the people of Gaza and what excuses they use to arrest fishermen. Soldiers then asked them their name, identity card, the number of boat.

The two fishermen were then taken to the port of Ashdod in Israel. Here the two fishermen were brought inside a room where they were asked for their identification and phone number. A doctor checked the state of their health and visited Khaled who was ill, for whom they gave an injection. “I asked them to remove the handcuffs because I was hurt”, he told Mahmoud, “but they refused.” The two then spent the night in jail, handcuffed.

The next morning, the two fishermen, in handcuffs, had their names put on their shirts and were photographed. Subsequently Mahmoud was questioned. Soldiers showed him a map of Gaza, and asked for information indicating some points on the map, especially in the area of ​​Soudania. Then they asked from what point of Gaza the boats sets sail from, then the soldiers pointed out a police station and a hydraulic pump. Mahmoud asked about his boat, but the soldiers said that to get his boat they should contact a lawyer. Soldiers know very well that the fishermen do not have the money to afford a lawyer and even the costs for standing trial. After interrogation, that lasted 30-40 minutes, Mahmoud was blindfolded again. After another 15 minutes, the soldiers shackled the legs of the fishermen, took them to a police car and had them transported to Erez, where the two fishermen were released with only what they stood up in. The fishermen had just 100 shekels between them, money they had earned in the sale of fish the previous day.

We asked two fishermen what they thought of the new limit of 6 nautical miles imposed by Israel. They explained that it is a good step, but in economic terms there is no change, except for the period of sardine fishery. About eight miles out there is a rocky barrier preventing the entrance of the bigger fish, so anglers need go beyond 8 nautical miles to significantly increase their catch.

Israeli soldiers confiscated the boat of two fishermen and even the nets, which were new. “This boat was the main source of income for us,” said Mahmoud. Both have moved out of their homes and both have a son. They live together with their parents and the rest of the family, which has around 13 members. Their whole family depends on the fishing. Now only his father and his brother can fish with another boat.

We asked Mahmoud if he wants to leave a message to our countries. “We would like to again with our boat. We would like the Israeli navy attacks to cease. We ask the people of countries around the world to force the Israeli government to open up the sea, to let us fish.”

We join the call of the fishermen and ask our governments to press Israel to stop attacking and arresting Palestinian fishermen and to allow them to fish freely.