New
Home / Gaza / Adel Baker, a fisherman from Gaza, now fighting for his life in hospital

Adel Baker, a fisherman from Gaza, now fighting for his life in hospital

On May 1st many countries celebrate the achievement of workers on Labor Day weekend. In Gaza too, workers celebrated labour day in a demonstration in the centre of Gaza City. Yet, for the Palestinian fishermen there was nothing to celebrate. 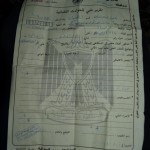 In the early hours of Wednesday morning on May 1st 2013, a Palestinian fisherman was seriously injured when Israeli naval vessels off the coast of Rafah, southern Gaza Strip, opened fire at Palestinian fishing boats that were within 3 nautical miles of the Gaza coast.During the attack, a piece of the engine that is used to pull in the nets, smashed into the head of 51 year old Karim Adel Al Baker from Gaza City, leaving him seriously injured.

Adel Najjar Baker was transported to the hospital and then to the European Hospital in Khan Younis. We headed to the hospital to check on his condition.Adel is in the Intensive care unit. A document in the hospital room reads,“Time of admission: 5am”We spoke with Dr. Yasser AlKhaldi, head of the Intensive Care Unit of the European hospital. Dr. AlKhadi told us that Adel has suffered a serious head injury and that he had arrived at the hospital unconscious.The doctor added that Adel has undergone surgery to relieve the pressure from the bone fragments from the skull and that he was now under artificial ventilation.
Adel has suffered a depressed skull fracture (a depressed skull fracture is a break to the bone of the skull with depression caused by the bone going into the brain).Dr. AlKhaldi added that there was an improvement to the condition of Adel and they have started to reduce the sedatives.

During the visit we met Aatef Baker’s brother Adel. “Adel was on a fishing boat together with eleven fishermen. While he was fishing, the Israeli navy opened fire, a bullet hit an object on the boat, it fell on his head, causing the trauma. We were near the border with Egypt, 2 miles from the coast. “, said Aatef.We left the hospital and took the contacts of Dr. Adel AlKhaldi and family in order to be updated on his condition.

I felt a sense of helplessness and anguish, but at the same time I was hoping with all my might that Adel was strong enough to survive, that he would be strong enough this time. 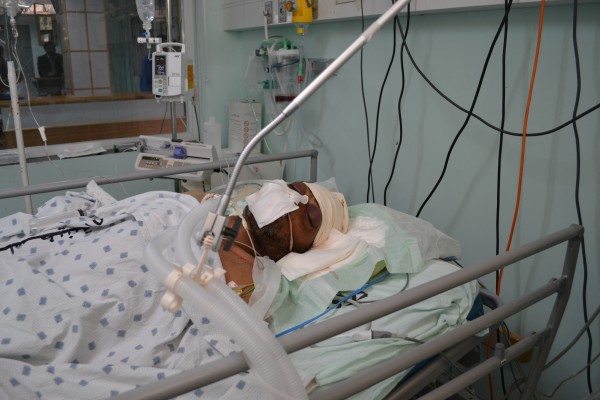 The next day we went to visit the family of Adel in the Shati refugee camp in Gaza City.
Adel has 7 daughters and 2 sons, one of whom is a fisherman. A cousin of Adel, Mostafa Baker, told us that perhaps they would later evaluate the possibility of a transfer to another hospital.
The house was full of women and children and they occasionally fixed their eyes on us.
“The entire family gathered here because we’re waiting for news. Adel’s brother is coming back from the hospital”, said Mostafa.
“The attacks and arrests affect our lives. With no fish we have no money,” exclaimed a woman of the family Um Eid Baker, adding, “remember when our fathers were able to reach 12 miles from the coast.”
Adel Baker worked for 30 years as a fisherman, and was the only person in the family to have a job, his family has no other sources of income.
“This is the normally the best season for fishermen” said Mostafa, “the major season for sardines.” The family then specified that the fishermen, because of the limit of the 3 nautical miles from the coast, are forced to go to Rafah in order to fish, and even enter Egyptian waters, a move that involves great expense especially for fuel.
During our conversation, Aatef, the brother of Adel, returned from the hospital carrying the hospital report.
The hospital report specified that Baker and Adel was transferred from Al Najjar to the European hospital, having suffered a head injury and damage to the brain. It indicates the need for surgery and treatment. In addition, the report specifies: “Al Aqsa conditions”, an expression which is used to define someone injured or a victim of Israeli aggression.
Then we met Sobeh El-Hessi, a fisherman who was on board the vessel along with Adel Baker, as well as the manager of the vessel.
“We were fishing the waters on the border between Egypt and Palestinian waters. At 2 am the Israeli navy started shooting, we were about 2 nautical miles from the coast,” he began to tell Sobeh. “We tried to hide from the bullets. Then when soldiers stopped shooting, we saw the body of Adel Baker lying on the floor and we thought he’d been hit by a bullet wound to the head. Then we realized that it was not a bullet, but a heavy object that is part of the engine, and Adel had a large wound to the head. I called the Union of the fishermen to communicate that someone was wounded and asked for an ambulance. Adel A Hasaka was carried to the beach and the ambulance was ready to take him to hospital, it was about 3 in the morning, “, Sobeh told us.
The fishermen had entered Egyptian waters and were returning to Palestinian waters when the attack happened.
The next day the fishermen did not go fishing.
Sobeh told us also with concern about the recent Israeli attacks with water cannons. The attacks are happening in fact even at a distance of 10 metres between the fishing vessels and the Israeli military.
Just over a year ago a fisherman was killed by a short circuit as a result of an Israeli attack with a water cannon.
The Israeli army directs their high pressure water cannons directly at the power supply, they shoot at networks, the engine, thus causing accidents. There is also the danger of electric shock or heavy machinery collisions such that with Adel.
“Fishermen can see the fish beyond three miles, but can not pass through them,” said Sobeh as he described the living conditions of the fishermen of Gaza.
“When the Israeli soldiers shoot we escape, but we can not support our families. These last few days have been tough. Prior to the war the Israeli attacks occurred at a greater distance, but after the war the Navy began to get very close and soldiers are shooting more than usual, “says Sobeh.
The eyes of Sobeh el Hessi are sad, frightened, but also angry about what happened to Adel.

In Gaza, going fishing now means going to face an army.
As reported consistently by the Palestinian Center for Human Rights, the Israeli attacks against Palestinian fishermen constitute a violation of international humanitarian law. Notably this is covered in article 3 of the Universal Declaration of Human Rights: that everyone has the right to life, liberty and security of person. Not to mention the right to work and the right to a life with dignity.
Indiscriminate attacks against civilians constitute war crimes.
Israel has progressively imposed restrictions on Palestinian fishermen’s access to the sea. The 20 nautical miles established under the agreements of Jericho in 1994 between Israel and the Palestine Liberation Organization (PLO), were reduced to 12 miles under the Bertini Agreement in 2002. In 2006, the area permitted for Palestinian fishing was reduced to 6 nautical miles from the coast. Following the Israeli military offensive “Cast Lead” (2008-2009) Israel imposed a limit of 3 nautical miles from the coast, preventing the Palestinians access to 85% of the water to which they are entitled according to the agreements of Jericho 1994.
The agreements reached between Israel and the Palestinian resistance after the Israeli military offensive in November 2012, “Pillar of Defense,” allowed Gazan fishermen back out to 6 nautical miles from the coast. Despite these agreements, the Israeli navy has not stopped attacks on Gaza fishermen, even within this limit. In March 2013, Israel imposed once again the 3 nautical mile limit, saying that the decision had been taken following the sending of some Palestinian rockets towards Israel.
In Gaza, there are currently about 4,000 registered fishermen, while in 2000 there were about 10,000. In the last ten years, the numbers have declined since Israel began to impose restrictions on access to the sea and used violence to enforce them, arrests and more attacks, forcing fishermen to abandon their work and deny them the only source of livelihood for their families. Many fishermen, with courage and determination, continue to risk their life in order to support their families.

At the time of writing, the conditions of Adel Baker have slightly improved, but he is still unconscious in the ICU. While Adel Baker fights on in the hospital, many fishermen are at sea facing the daily risk of new attacks. It is inevitable, given this barbarity that another one of them will soon be facing a similar fight just like Adel is right now.
While the international community remains in horrible silence, our thoughts and our hearts are on the side of these brave men.