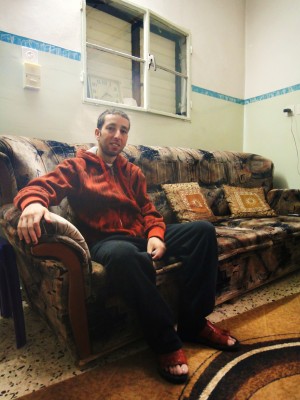 Helmi Abdul Azeez Hassan was shot with live ammunition by a settler on 23rd February at short range and came very close to death. He spent nine days unconscious before he woke up in hospital only to be interrogated and accused of throwing stones. Two months later, he sits down with his family and international activists and is happy as he talks of his life, with his wife expecting a child. His two year old daughter, shy of strangers, runs to his legs to be embraced as tea and coffee is passed around.

Helmi’s recovery is slow but is of great relief to his family. He is housebound by his injury but still makes regular trips to the hospital with the possibility looming of another operation. Sixty six percent of his liver was removed due to the extensive damage caused by the shot. The catheters repairing the arteries to his heart will have to be replaced soon – they only last three months.

A builder by trade, Helmi arrived home from work to find that around 15 heavily armed settlers had invaded the village. A shot from one of the settlers narrowly missed his heart and would have mortally wounded him, had he not been able to receive immediate treatment. Despite this, it will be at least six or seven months before Helmi will be able to go back to work.

His mother brings in a bounty of freshly baked bread, zatar, cheese, olives and biscuits to be enjoyed by everyone in the room. Palestinian hospitality is once again displayed as the visitors are told to eat and drink more, distracted from the interview.

On waking up on a hospital bed less than two months ago to be confronted by his interrogator, who said that Helmi ‘got what he deserved,’ Helmi speaks profoundly of his experience, commenting that he was ‘injured and close to death. No one in the Israeli government condemned this action,’ – pointing out that they did not pursue those responsible, yet ‘they arrest Palestinian children for throwing stones.’

Qusra has had to deal with many violent attacks from settlers and escorting soldiers. The small village is collecting a number of inhabitants who were injured and in many cases seriously. Also present at the gathering is a school teacher who updates us about Osama Rami Hassan’s situation. Osama is a 16 year old boy who was shot in the face with a rubber-coated steel bullet narrowly missing his eye, on the same day two months previously that Helmi was shot. For some time Osama wore an eye patch before it was removed recently – he is also well on the way to recovery – ‘step by step’ says the school-teacher. Whilst his physical recovery is going well and he is unlikely to lose his sight, Osama constantly thinks of the attack and may be suffering psychologically because of it. However, his teacher says that he is strong and is doing well in school, having recently enjoyed a school trip to Qalqilia.

Another in the series of injured villagers is Ammar, a 21 year old who was shot with live ammunition in the leg on January 10th 2013. He is still using crutches but is believed to be able to make a full recovery.

Akram Taysir Daoud was attacked and beaten unconscious after being lured into an ambush when settlers called to him in Arabic on the 15th September 2012. He was beaten with sticks and rocks and left for dead, but fortunately regained consciousness after 15 minutes so he could phone his brother for help. His injuries were so severe that he lost his ability to smell or taste – this has not recovered in the seven months since the attack. Recovery from his other injuries however, has been good and now he has been able to return to work.

Settlers mainly from the Esh Kodesh and Qida illegal settlements have uprooted more than 2,400 olive trees in the last three years in repeated attacks against the land and the inhabitants from Qusra. Attacks have been coordinated acts of terror against the Palestinian population such as the joint attack on Urif and Qusra that injured Ammar. Settlers are known to travel from illegal settlements in the south to attack villages in the north as part of this campaign of violence against the Palestinian community.

Helmi is asked what his hopes are for the future as our meeting comes to an end. Straight away he responds with three points, that ‘Settlers should stop their attacks, return our lands and that we can live in peace and quiet.’

Helmi’s is still the most recent attack by settlers against the residents of Qusra and we say goodbye to him and his family, pleased to hear that ‘step by step’ the people of Qusra are recovering. They show their strength by their love for each other and their commitment just to live in ‘peace and quiet.’

There is hope and relief in the gradual recovery of those who have been injured recently. Residents are still reminded how close they have come to death and that such threat still exists for the present future. Tragedy has previously visited Qusra residents when Issam Kamel Odeh, 33, died from Israeli gunfire after settlers invaded the village in September 2011.