Akram Taysir Daoud from the Palestinian village of Qusra, was beaten unconscious on Saturday 15,September by Israeli settlers from the illegal outpost of Aysh Kodesh. He sustained extensive injuries, including a broken arm and major damage to his eye and face.

Akram’s sister Sanora reported that the family had been farming their land, which is on the outer edge of the village of Qusra, when they heard shouts and threats from settlers. Akram urged his family to go back to the house, leaving him alone. In response to a shout in Arabic, Akram moved to a more isolated area, not realising the call had come from settlers. It was at this point that the settlers attacked him. 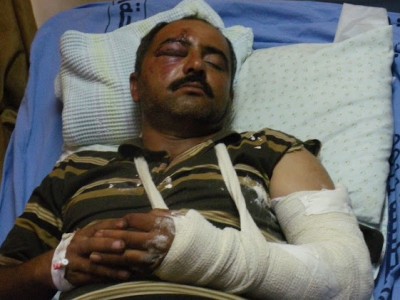 Akram’s injuries are consistent with his report of a sustained beating with sticks and rocks by three settlers, after which he fell unconscious and was left for dead. After 15 minutes, Akram regained consciousness and was able to call his brother and identify his location over the phone. He was found in one of his fields and taken by car to Rafidia hospital in Nablus.

Around twenty further settlers reportedly then arrived, clashing with villagers who had come to protect Akram and his family, after having heard about the attack. Israeli military also arrived at the scene, but took no action to halt the extremist settler attack – instead reportedly shooting tear gas and rubber bullets at the Palestinians. This is the third attack of a similar nature in 3 weeks on the village of Qusra, and according to Akram, last week settlers directly threatened to kill him.

Illegal Israeli settlers in the occupied West Bank often attack Palestinians with impunity, with the Israeli army standing by or even amongst settlers during attacks, or reacting violently when Palestinians act to defend themselves. When attacks and injuries occur, it is often difficult for ambulances to reach villages like Qusra, due to Israeli roadblocks and checkpoints, so despite the additional dangers of transporting injured people by car, it is often necessary in the West Bank.

Ellie Marton is a volunteer with the International Solidarity Movement (name has been changed).