Farmers attacked by Israeli army and settlers, preventing them from planting olive trees in memory of Rachel Corrie 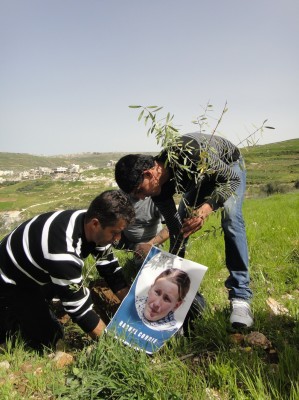 Farmers peacefully planting olive trees in the land of Asira al Qiblya were today disrupted by Israeli soldiers who halted the planting. The presence of Palestinians on their own land also attracted the attention of illegal settlers from the nearby settlement of Yizhar, leading to them attacking Palestinians farmers and volunteers, throwing and catapulting stones. The army moved immediately to protect the attackers, shooting tear gas and rubber bullets at Palestinians.

The olive trees were being planted in the vicinity of an Israeli military tower, recently built on a hill above Asira al Qiblya. Because of this, soldiers hassled farmers throughout the day, with an escalation of hostility mid-morning, when around 20 soldiers approached and demanded that farmers should stop planting trees and leave the land, despite the fact that the Palestinian owner of the land notified them that he wished to continue farming. The commander advised that the village should contact the Israeli district coordination office (DCO) to request permission – if permission was granted, he intimated, then the farmers would be allowed to access their land unhindered.

However, the villagers of Asira al Qiblya know this not to be the case. Just last week, access was requested and granted for three days through the DCO – despite this, a shepherd grazing his herd on the land during this “permitted time” was ordered to leave the land and was severely beaten by soldiers. It is clear that the outcome for villagers is the same whether permission is granted by Israel or not.

After a long confrontation with soldiers, farmers moved further down the hill to continue planting in an area arbitrarily deemed acceptable by the Israeli commander. At this point, around twenty masked settlers from Yizhar arrived and proceeded to attack the farmers from their vantage point higher up the hill – throwing stones by hand and with slingshots. Yizhar settlement is widely considered one of the most violent settlements in the West Bank, and all villages in its vicinity face regular attacks. 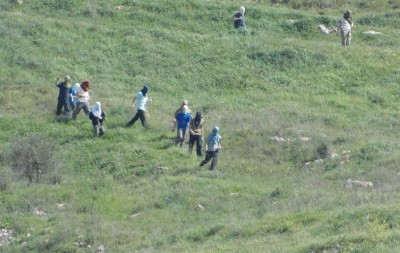 Palestinian youths moved to fend off the settler attack, but the Israeli army intervened on behalf of the attackers, shooting tear gas and rubber bullets at the villagers of Asira, until both the Palestinian villagers and settlers left the area. No injuries or arrests were reported.

At the end of the day only around ten olive trees had been planted due to interruptions from the army and settlers – farmers were also not optimistic that the young trees would be allowed to remain on their land and suspected that either the army or settlers would destroy them. However, they refuse to relinquish access to their land despite these setbacks and will continue planting trees in the area.

The olive trees planted today were donated by the International Solidarity Movement to replace Palestinian trees destroyed by Israeli forces and settlers during previous years – a common occurrence throughout the year. They were planted in memory of ISM activist Rachel Corrie as the tenth anniversary of her death approaches. She was crushed to death with an Israeli army bulldozer in Gaza in 2003 whilst protesting non-violently in solidarity with the Palestinian people.