Dave and Marco are being held in Givon prison and are expecting deportation.

One of them, Marco Di Renzo (54), has decided to start a hunger strike from tonight in solidarity with Palestinian political prisoners and to protest against his illegitimate deportation. He will also stop taking his blood pressure medication, which is life threatening for the condition he lives with, Thyroidectomy.

The charges against him are being in a closed military area and assaulting a soldier with his camera, which is completely untrue. 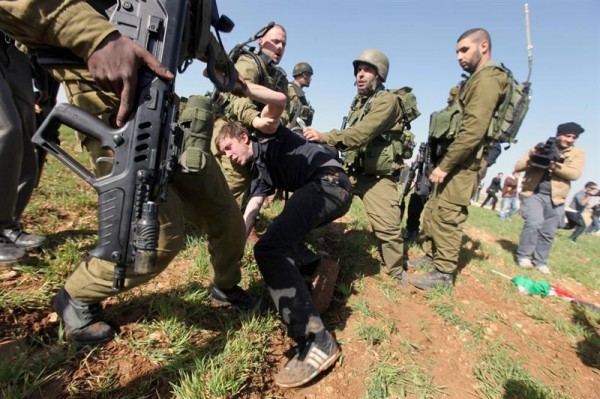 Two activists from ISM (International Solidarity Movement) were arrested at the Canaan protest village and are now facing deportation proceedings. They are expecting to be in court in Jerusalem later today.

Israeli occupation forces yesterday thwarted two attempts by Palestinian activists to establish a new camp village near Yata in the Southern Hebron Hills, protesting Israel’s illegal settlement policy. The outpost, named “Canaan Village”, is the fifth in a series of protest encampments that was launched with the establishment of Bab Al-Shams last month. The aim of these tent villages is to confirm Palestinian ownership of the land through concrete actions and to protest against Israel’s illegal settlements by mirroring its strategy of “creating facts on the ground”.

Very early on Saturday morning, around 30 activists were interrupted in their attempt to set up tents near Karmel settlement by Israeli soldiers who arrived on the scene to remove the steel framing and confiscate part of the material. “We came here to build a Palestinian village upon Palestinian land, and to freely use our land in the way we want. As Palestinians we have rights and own this land,” activist and coordinator of the popular committees in the southern West Bank, Younis Araar, stated. 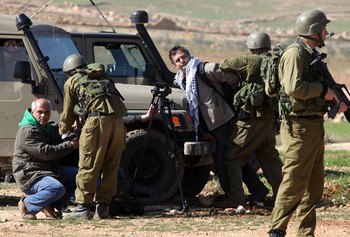 Undeterred by the army’s quick  intervention and demolition of the tents, activists reorganised themselves and  moved to rebuild the camp outside At Tuwani village at around 9am. Around 40 activists used the remaining material to set up one tent, as well as building stone circles and placing the Palestinian flag on the land. Thus Canaan Village was re-established on Palestinian-owned land that is under threat of confiscation due to planned extensions of the nearby settlement of Ma’on.

The number of protesters gradually grew as nearby residents and other activists came to join in the action, eventually reaching about 120. Within half an hour of the protesters arriving to set up the camp, the army had arrived at the scene too, and soon declared the area a close military zone amidst loud chanting of the Palestinian activists. The army then used large amounts of skunk water against the protesters. After successfully dispersing the crowds, it directed the water-jet directly at the tent and the handful of activists that had refused to leave it despite the appalling odour, causing the tent to fall together under the force of the water. The activists fled the tent and the army took over the part of the land with the destroyed tent on it.

Nevertheless, the protesters refused to leave and continued chanting and facing up the line of soldiers. Various journalists, photographers and videographers were standing to the side documenting the events. For no apparent reason, the soldiers suddenly lept forward, seizing a Palestinian videographer in an attempt to arrest him, which sparked an outcry among the crowd and caused activists as well as other media personnel to come to his help in an attempt to de-arrest him. Clashes ensued between dozens of protesters and soldiers, which lead to several arrests, including at least three journalists and an ISM volunteer from Italy. Soon after, a woman was injured after soldiers tried to arrest her, causing further clashes between the army and fellow protesters trying to protect her, and leading to the arrest of another Palestinian and an ISM volunteer from Britain. All together, five Palestinians were arrested during the action, according to an army spokesperson.

With the only tent taken over by the army earlier, and several photographers and videographers now arrested causing both intimidation and a lack of media attention, the protest seemed to loose its focus and structure after around 11am. Although villagers and other activists continued to join, no-one took charge to co-ordinate further actions such as chanting or sit-ins, and neither did the army move to disperse the protestors. Over the next 3 to 4 hours, people were mostly sitting around, spread out across the field and down the street leading up to it, chatting to one another, with the army standing around watching. Only a couple of dozen people remained up front, facing the line of soldiers. They did manage, however, to re-gather people to pray the Dhuhr prayer in two long rows right in front of the soldiers, in a beautiful and powerful act of non-violent resistance.

Despite the short existence of Canaan Village, its establishment is part of an encouraging series of protest villages over the last month or so. Whilst the West Bank has witnessed a surge in direct-action grassroots activism in recent weeks, the international community has become increasingly critical of Israel’s illegal settlement policy and other actions in violation of international law, all of which are signs of hope for the Palestinian people as they continue their struggle for justice and dignity. 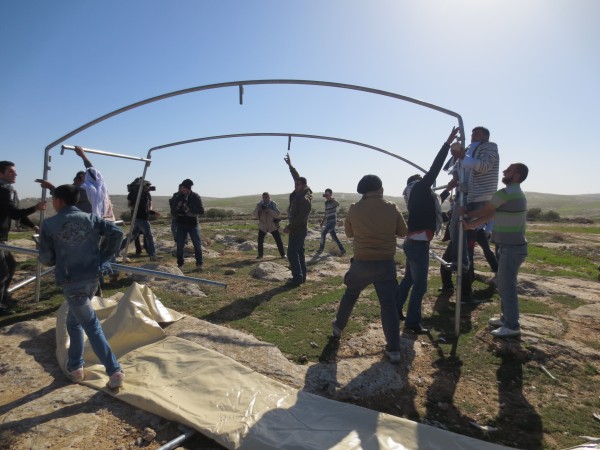 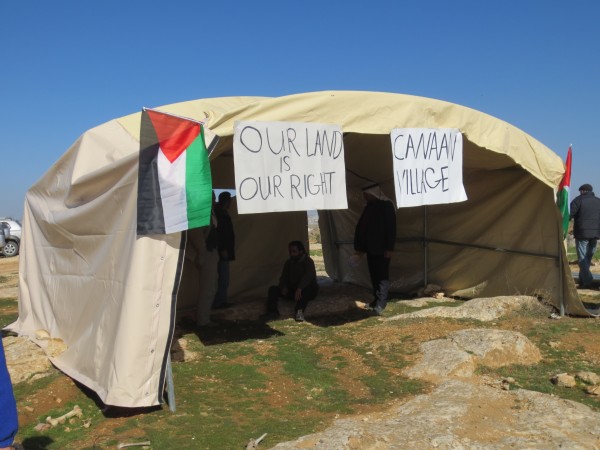 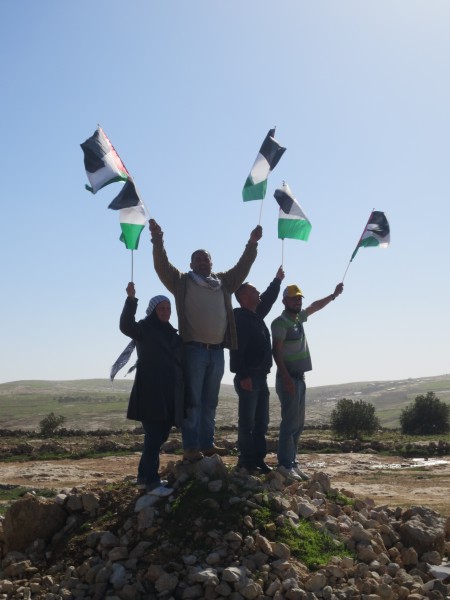