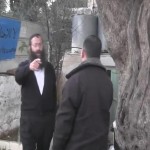 A non-violent activist group was attacked last night by a gang of settlers including the ultra right-wing Israeli politician Baruch Marzel.

Members of the Hebron based non-violent Youth Against Settlements group say that Marzel’s son and friends came to their centre, located on the edge of the illegal Tel Rumeida settlement, and began throwing stones at the activists.

Baruch then arrived, entered their property without permission and attempted to strike Issa Amro, the group’s coordinator. This event was captured on film.

The group also told how Marzel attempted to kick Jawad Abu Eysheh. Soldiers soon arrived and separated the crowds. Amro and Abu Eysheh were detained and the settlers were allowed to return home, despite video evidence of their violence.

Marzel, who recently stood for election in the Knesset, is no stranger to violence. He has an extensive criminal record that includes assaulting Palestinians and vandalism. He used to be a member of the Kach party, considered to be a terrorist group by Israel, the United States and the European Union.