Israeli occupation forces demolished a rainwater cistern on the outskirts of Fawwar refugee camp this morning.

The 130 square metre structure was destroyed after soldiers arrived at 9 am and began bulldozing the cistern which was constructed 5 years ago.

The cistern’s owner said that the demolition order was given to him the previous day and he did not take legal action to prevent the action. They also gave a demolition order for 2 more cisterns in the vicinity and the residents of the camp fear their imminent destruction.

10 soldiers, an army jeep and a bulldozer arrived and the area was secured while they destroyed the cistern as locals watched. 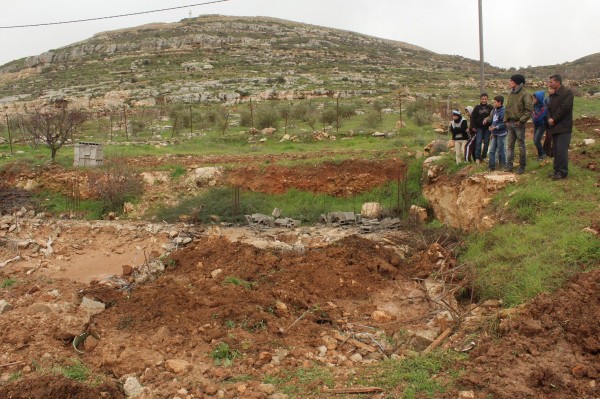 What remained left of the demolished cistern

Fawwar lies 10 km soutwest of Hebron. The camp was was established in 1949 and its original inhabitants came from 18 villages in the Gaza, Hebron and Beersheeva areas. The area surrounding the camp lies in Area C which makes up 60% of the West Bank and is under full control of Israeli occupation forces. Demolitions in Area C are commonplace. Residents are often water vulnerable and according to the UN, 46 rainwater cisterns and pools were demolished in 2011.