Israeli soldiers in Hebron tied up and blindfolded a Palestinian activist this afternoon because he walked on the ‘Jewish side’ of the road.

Issa Amro, coordinator for Youth Against Settlements, was detained on Shuhada Street, sections of which are segregated with the majority reserved for the illegal Israeli settlers and Israeli military, leaving only a tiny portion open for Palestinian use.

Issa claimed he wasn’t walking in the Israeli only section of the road and that the soldier became infuriated when he told him to check the rules with a commanding officer. The soldier then told Issa he would be detained for 2 hours, however, he was released after 20 minutes. Issa believes that one of the illegal settlers had instructed the soldier to harass him.

Locals, members of the press and international activists turned up and the soldiers refused to answer questions about why he was being detained, or let anyone bring him water. One soldier then forced the crowd to stay 25 metres away.

Palestinians, Israeli soldiers and illegal settlers are always in close proximity in Shuhada Street and as a result it is an extremely volatile area of the city. On Sunday, Israeli soldiers extended a section of the apartheid road near the Ibrahimi Mosque. The newly constructed barrier runs past a Palestinian home due to be rebuilt meaning that when it is finished, Palestinians will have only half a metre to walk on. 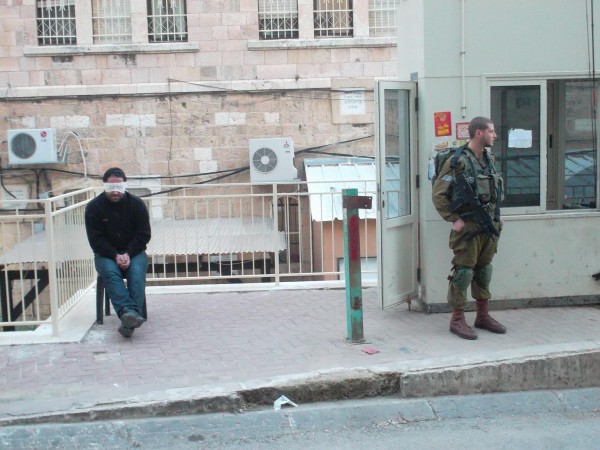 Tagged with: Hebron Youth Against Settlements