The Israeli occupation forces have shown a large amount of aggression recently in the Tel Rumeida neighborhood of Al Khalil (Hebron). Three Palestinian homes near the ancient Jewish cemetery were entered and searched on the 30 December. Another apartment rented by internationals had soldiers attempting to forcibly enter that same night, the armies’ alleged reason was to get onto the roof.

Today (31 December) Israeli army personnel entered deep into the H1 Palestinian-controlled area of the neighborhood at 4 pm and apprehended a person at a shop who was using a knife for his work. They detained him for more than an hour, during that time he was kept blindfolded.

The Protocol Concerning the Redeployment in Hebron of 1997 cites that “Israel will continue to carry the responsibility for overall security of Israelis” and that “both sides reiterate their commitment to maintain normal life throughout the City of Hebron and to prevent any provocation or friction that may affect the normal life in the city.” In the above described case there is no doubt the Israeli military overstepped their bounds. There was no security threat to any Israeli, therefore apprehending anyone or entering any place was a clear violation of the Oslo III agreement.

When activists arrived at the scene there was no explanation given by the Israeli army for why they handcuffed the Palestinian worker and put him into a police car. The army commander demanded instead that the international asking questions hand over his passport. When the international refused and asked for a police officer, the commander insisted upon having it, even though he has no right to obtain such identification.

In addition threats have been made by soldiers to internationals living in Tel Rumeida. Sound bombs have been used at night in the H1 area around Palestinian homes as well and there have been unconfirmed reports of beatings inflicted to Palestinians by the army. 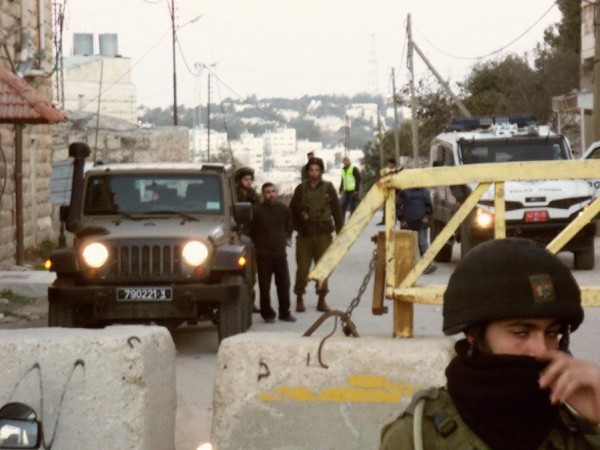 Israeli soldiers in H1 and H2 area in Hebron