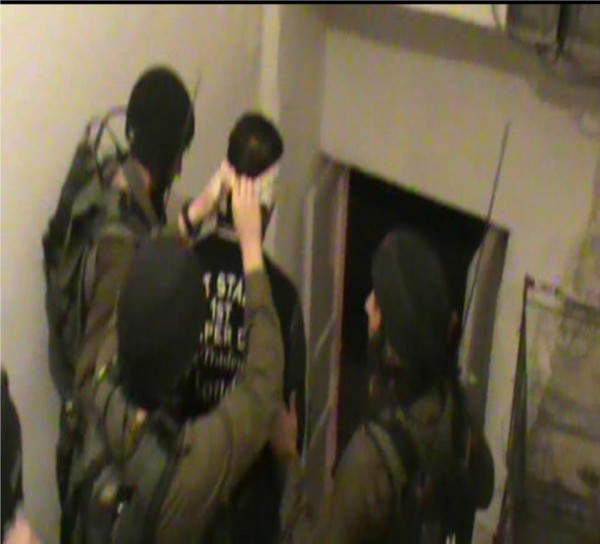 Photo of the Abduction from Youth Against Settlements

At approximately 2am Israeli occupation forces climbed down from the roof at the back of a family complex on Shuhada street to apprehend student Abed Al Salayma, age 20. Abed was blindfolded and led from his home a short time thereafter while his distraught mother remonstrated with the soldiers. Thirty minutes later his mother Jamille Hassan Shalaldh, age 50, was handcuffed, arrested and taken away.

After the Israeli military forced entry, they did not provide the family with a written warrant or verbal explanation for why Abed was being siezed, therefore this event is a kidnapping. Hence the mother’s appropriate distress as she followed the soldiers out of her house and onto the street in aid of her son. While expressing her frustration Jamille collapsed on the street at 2.50am and was roughly handled for a number of minutes causing her to breakdown again. A settler got out of his car and spoke to the soldiers during the incident.
One family member brought a chair for Jamille to sit on. The army sat Jamille on the chair and promptly handcuffed her behind her back. She received no treatment from the soldiers during the event. An ambulance was called to the scene but the paramedics were denied entry through the checkpoint. At 3:15 the Israeli Police arrived and a few minutes later she was transported by vehicle to an undisclosed location.

As the situation stands there have been no charges pressed against either Jamille or Abed, and the family continues to be in the dark as to their whereabouts. Speculatively, Jamille is close by at a health clinic and is reported to be surrounded by soldiers.

Five months ago both were arrested, Abed had to pay money to be released. As in this instance there was no apparent reason for why the Israeli occupation forces apprehended them. There have been several instances of conflicts between the Salayma family and settlers, including one that involved a large mirror being brought to the Salayma household and thrown at Jamille.

Abed is Jamille’s only son, he studies at Hebron University and aims to be an English teacher. Before his detainment he translated for EAPPI (Ecumenical Accompaniment Program in Palestine and Israel).