Abdelateef Obeid was today freed from Salem prison, following a bail payment of 5000 NIS. He was arrested on the 21st of September from his home in Kufr Qaddoum. The military court judge has not yet provided reasoning for this decision, but it is hoped that the argument will also provide a basis for the release of Abdelateef’s brother, Majd Obeid, who is currently still in prison.

On Sunday, a military appeals court judge in Ofer prison decided that there may be merit to arguments of discrimination in the case of Abdelateef Obeid. The judge, who seemed doubtful of the prosecution’s case, has granted the Israeli military another day to address gaping discrepancies in the Obeid case.

The defense argued that Abdelateef’s continued detention constituted “the essence of discrimination. “ He said that the evidence in the case is weaker than that brought against four international peace activists arrested on the same day for the same charges. 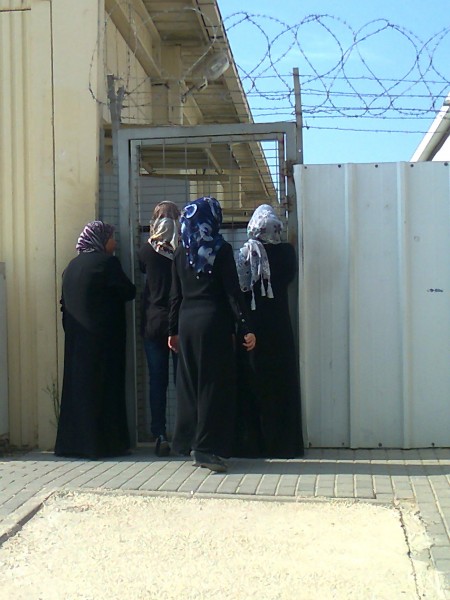 The family of Majd and Adbelateef wait to see the two brothers outside the court in Salem last Monday.

Abdelateef and his brother Majd were arrested on 21 September along with the four international activists on charges of stone throwing after a weekly demonstration in the West Bank village of Kufr Qaddoum.

In court on Sunday, Abdelateef’s attorney drew attention to the fact that the prosecution alleges stronger evidence against the international activists, than against Abdelateef, yet the four activists have been released without condition. He said that, in the case of Abdelateef, there is testimony from one soldier, whereas two soldiers claim they saw the activists throwing stones at the demonstration last month.

Another discrepancy lay in the consistency with which soldiers claim to have maintained a line of sight on those accused. Additionally, the soldier who arrested Abdelateef is not the same one who swears he saw the two brothers run into a house after the protest. Instead he merely confirmed hours later that they were the same men he had seen.

The prosecution’s case hit another snag when is was revealed that the Israeli occupation forces never investigated Majd and Abdelateef’s alibis for the afternoon of the demonstration. The family of the two men have stated that Majd and Abdelateef were both at home the day and that soldiers arrested whatever young men happened to be in the house when they invaded Kufr Qaddoum and broke into the Obeid home on the 21st of last month.

The prosecutor, who seemed nervous at the judge’s reception of Abdelateef’s case, argued that three of the released international activists, who appeared in court on Sunday, were not the same people as those arrested in September. He claimed instead that perhaps those activists had already been deported back to their home countries.

The judge permitted the prosecution a further day of investigation to discover any evidence to back up this false claim. A decision in the case is expected on Monday evening.

Ben Greene, Ellie Marton and Leila James are volunteers with the International Solidarity Movement (Names have been changed)