Attorney Hussein Abu Hussein, who represented Rachel Corrie’s family in its suit against Israel, says they knew from the beginning that it would be an uphill battle to find truth and justice in an Israeli court.

On Tuesday, Judge Oded Gershon of the Haifa District Court dismissed the civil lawsuit I brought on behalf of Rachel Corrie’s family against the State of Israel for the unlawful killing of their daughter, an American peace activist and human rights defender who legally entered Gaza to live with Palestinian families in Rafah whose homes were threatened by demolition.

While not surprising, the verdict is yet another example of impunity prevailing over accountability and fairness and it flies in the face of the fundamental principle of international humanitarian law – that in a time of war, military forces are obligated to take all measures to avoid harm to both civilians and their property. 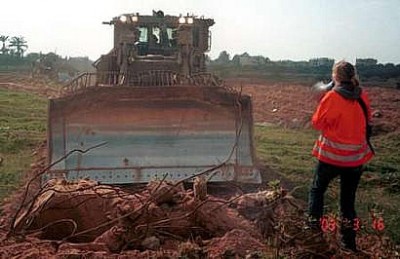 It is not the first time courts have denied victims of Israeli military actions the right to effective remedy. Just ask the many Palestinians who have faced a myriad of legal hurdles and fought for decades simply to have their day in court. Thousands of legitimate claims continue to be denied based on the controversial legal theory – which Judge Gershon adopted – that soldiers should be absolved of civil liability because they were engaged in military operational activities in a war zone.

Rachel’s case is unique because she was the first foreign national to be killed while protesting Israeli occupation, though she was hardly the last. Tom Hurndall, a British peace activist, was shot in the head and killed by an Israeli sniper less than three weeks after Rachel was killed. And less than a month after that, James Miller, a British cameraman was also shot and killed by the IDF in Rafah.

In reaching his decision in Rachel’s case, Judge Gershon accepted virtually all of the government’s legal arguments and either ignored or distorted critical facts in order to reach his decision. For example, he concluded that Rafah was a closed military zone, as declared by the Israeli military’s southern command (never mind that no such order was presented in court, and the ground unit commander testified he was unaware of the area’s designation as a closed zone). And that conclusion had implications.

When the former Gaza Division’s Southern Brigade Commander Colonel Pinhas (Pinky) Zuaretz, who was in charge in 2003, testified, he confirmed that the rules of engagement at the time Rachel was killed were to “shoot to kill any adult person on the [Philadelphi] route.” As another Israeli colonel who testified put it: “There are no civilians in a war zone.” By accepting the testimony of Zuaretz and others, Judge Gershon essentially accepted that the “shoot to kill” order was acceptable, which violates the fundamental tenets of international humanitarian law, mandating that soldiers distinguish between combatants and civilians.

We knew from the beginning that it would be an uphill battle to find truth and justice, but we are convinced that this verdict not only distorts the strong evidence presented in court, but also contradicts fundamental principles of international law with regard to protection of human rights defenders. In denying justice in Rachel Corrie’s killing, this verdict is part of a systemic failure to hold the Israeli military accountable for continuing violations of basic human rights. As former U.S. President Jimmy Carter put it: “The court’s decision confirms a climate of impunity, which facilitates Israeli human rights violations against Palestinian civilians in the Occupied Territory.”

The Corrie family has always stressed that the purpose of this lawsuit was larger than compensation for their loss. For them, it was about understanding exactly what happened to Rachel and exposing the injustices their daughter and her friends in the International Solidarity Movement stood against. They filed suit on advice of Lawrence Wilkerson, former Chief of Staff to U.S. Secretary of State Colin Powell, who, on behalf of the State Department, told the family in 2004 that the United States did not consider the investigation into Rachel’s death to be “thorough, credible and transparent.”

The U.S. government has repeatedly reiterated its position regarding the failed investigation, and after nearly seven years of mounting evidence since the case was initially filed, it has become even clearer that the military conducted its investigation not to uncover the truth of what happened, but rather, to exonerate itself of any blame.

In his decision, Judge Gershon concluded that because Rachel put herself in harm’s way, she is to be blamed for her own death. That conclusion puts at serious risk the lives of human rights defenders and it creates yet another dangerous precedent regarding the protection of civilians in war. Not surprisingly, the court avoided any analysis of international law obligations.

The verdict ensures that the Israeli culture of impunity will continue unchecked. Rachel Corrie lost her life standing non-violently with those who have been subject to Israel’s systematic policy of destruction and demonization. Like the Freedom Riders in the United States who, during the civil rights movement, joined oppressed black communities in their struggle for equality, Rachel and her friends in the ISM presented a new challenge and model of non-violent activism, solidarity and resistance to the longest military occupation in modern history.

Hussein Abu Hussein is a human rights lawyer and co-founder of the Arab Association for Human Rights. He represented the Corrie family in their case against the Israeli government and the Israeli Ministry of Defense.