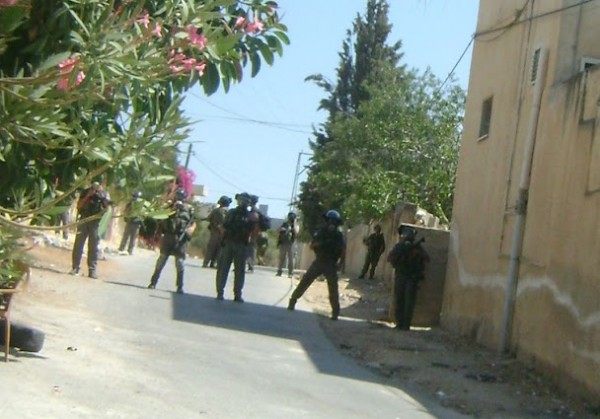 The Israeli army and border police blocked a road in the village center. Picture by Ellie Marton

Just after noon on Friday 14th September, Israeli forces invaded the village of Kufr Qaddoum, prior to a demonstration due to begin at 1.15pm. The Israeli army and Border Police blocked a road in the village center, stopping villagers from attending Friday prayers at the mosque – this is the first time that the tactic of pre-emptive invasion has been used to suppress the weekly demonstration in Kufr Qaddoum.

Prayers were held instead outside the mosque, after which chanting commenced as a start to the planned protest. Israeli forces responded immediately with tear gas rounds, advancing further into the village. Further tear gas rounds were fired at head height, directly towards houses in the street where protesters were gathered.

Israeli forces on the hillside sought to isolate groups of protesters by attacking via side streets. The combined effect of the Israeli actions was to cause the demonstration to be pushed into the heart of the village, increasing the danger for civilians.

Following the end of the demonstration, Kufr Qaddoum Popular Committee representative Murad reported that there had been a village invasion at 5pm Thursday 13th September also, by soldiers in jeeps who entered the village and fired tear gas for no reason. He continued, ‘We don’t want to demonstrate for the sake of demonstrating. We don’t want to see our children killed, our houses damaged. Give us our rights. We will demonstrate until then.’

The weekly demonstration in Kufr Qaddoum is to protest against the closure of the main road between the village and Nablus, the nearest city, which is 13 km away. The road closure doubles the distance from Kufr Qaddoum to Nablus.

Israeli tactics at Kufr Qaddoum – invading the village from several sides, meeting demonstrators with immediate excessive force, blocking roads to prevent access, and bringing Border Police to try to arrest international observers – follow a pattern seen throughout the West Bank that aims to systematically deny basic human rights to freedom of assembly, freedom of religion, freedom to protest and freedom of movement, and also violates the obligation of military forces not to use disproportionate force.

Ben Greene is a volunteer with the International Solidarity Movement (name has been changed).