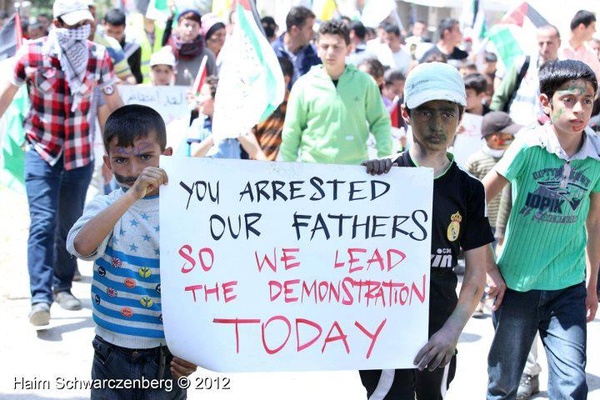 Palestinian children from the village Kufr Qadoum, whose fathers were detained by Israeli soldiers, carry on the protest: “You Arrested Our Fathers, So We Lead the Demonstration Today”

Five men were arrested in an early morning raid on the town of Kufr Qaddoum Tuesday by Israeli occupation forces.

According to an eyewitness named Morad, soldiers fired tear-gas bombs as the left the village with the men.

“I saw from my balcony on the third floor,” said Morad on Saturday! “I was with my three year old child. The gas came in my house where my wife and children were.”

Morad said that soldiers have arrested at least 100 people and have damaged at least 5 homes in the last year. It was at that time that residents began a weekly demonstration to protest the 12-year closure by Israeli occupation forces of the most direct road from the town to nearby Nablus city.

The road was closed during the Second Intifada and has remained closed to Palestinians. It runs by 3 illegal Israeli settlements, Mitspe Kedumim, Eshkubiyot, and Kdumim South and is open for settlers to use.

Because of the road closure, the 5,000 residents of Kufr Qaddoum must travel 15 kilometers south and east to reach Nablus, a journey that once took one and a half kilometers to complete.

The Palestinians for Kufr Qaddoum have faced on-going harassment by occupation forces. They have also lost 4,000 dunams or about 1,000 acres of land to the illegal settlements near the village. They face restricted access to their agricultural lands by Israeli soldiers and cameras.