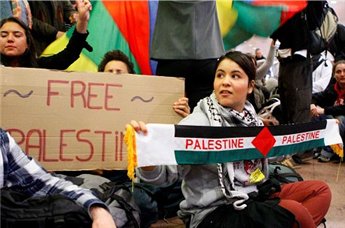 Activists pictured during a protest at Brussels national airport in April.
Some 1,200 people throughout Europe had bought plane tickets for an
April 15 visit to the West Bank as part of a campaign called “Welcome
to Palestine”. (Reuters/Sebastien Pirlet)

Dozens of foreign peace activists were denied entry into the West Bank by Israeli authorities at the Allenby Bridge crossing on Sunday evening, organizers of the third ‘Welcome to Palestine’ initiative said.

“The Welcome to Palestine Campaign decries the Israeli denial of entry via the Allenby Bridge to over 100 internationals who wanted to visit us in the occupied Palestinian Territories,” organizers said in a statement.

The group of around 100 activists had finished passport checks at the Jordanian side of the Allenby crossing but were denied entry at the first Israeli checkpoint and told to return to where they had come from, a spokesman for WTP told Ma’an.

No explanation was provided by Israeli crossing authorities as to why the group was denied entry, but the delegation will try to enter the West Bank again on Monday, the spokesman added.

“The denial of entry today at the Allenby Bridge border crossing from Jordan shows that the previous policies of siege and isolation continue,” organizers said.

“We thus will continue to initiate more Welcome to Palestine campaigns. We insist on the freedom of entry. As Israel persists in these unjust policies, it is only fair to ask all countries to reciprocate by denying Israelis entry to these countries.”

Since Friday, around 100 activists have arrived in Jordan, with the intention of crossing the Israeli-controlled border with the West Bank on Sunday. 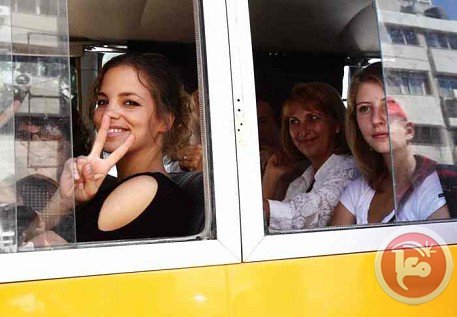 Pro-Palestinian international activists smile in Amman, as they head towards
King Hussein Bridge at the border between Jordan and Israel,
August 26, 2012.(Reuters/Ali Jarekji)

Political figures were due to greet the delegation in Bethlehem and the group was then scheduled to spend five days visiting Jerusalem, refugee camps, the Negev and villages in Hebron that are struggling against Israel’s separation wall.

Welcome to Palestine had previously organized two “flytillas,” when foreigners stated their intention to visit Palestine on entry to Israeli airport Ben Gurion, drawing Israel to deny entry to many of the passengers and distribute blacklists to airlines. 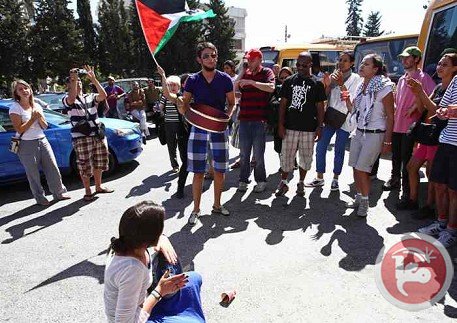 Pro-Palestinian international activists wave a Palestinian flag and perform a dance
in Amman, before heading to King Hussein Bridge at the border between
Jordan and Israel, August 26, 2012. (Reuters/Ali Jarekji)