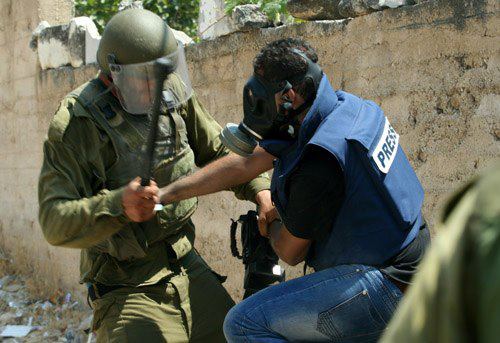 The Foreign Press Association (FPA) is demanding an investigation of the incident in which soldiers beat journalists.

The FPA contacted the Prime Minister’s Office and the Israeli army following the incident in which journalists were beaten with sticks. Minister of Public Diplomacy: Expresses doubt concerning journalists who compare Israel to a dictatorship.

The Foreign Press Association today contacted the Prime Minister’s Office and the Israeli army, demanding an immediate investigation into the incident last Friday in which foreign and Palestinian journalists who arrived to cover the protest demonstrations against land confiscation in Kufr Kadum, near the settlement of Kedumim in Samaria, were beaten.

In a video documenting the incident, soldiers are seen calling on the journalists to halt, advancing toward them with sticks and then beating several of them. As a result of the soldiers’ violence, the hand of a photographer with AFP was injured and he required medical treatment.

A notice published by the FPA says that it “expects immediate and public action by the self declared ‘only democracy in the Middle East’ following Fridays premeditated beating of clearly marked, identifiable members of the press by the IDF. The ‘soldiers’ shown attacking our colleagues are acting like a bunch of thugs. The images we see here are usually associated with failing dictatorships. Their actions are simply criminal assault and it should be treated that way by the Israeli authorities.”

The head of AFP in Israel told Haaretz that “to our sorrow this is not an isolated incident. The journalists and photographers who arrive are detained and sometimes beaten and this prevents them from doing their job. It is very sad and bad, and is part of the weekly thuggery of the military forces.”

The Israeli army spokesperson said in response that “the event is known by the IDF and is being investigated by the commanders. As a rule, the IDF respects and permits the free activities of journalists in the area in order to ensure ongoing freedom of the press even in areas possessing a confrontational character. On the face of it this appears to be an exceptional event and the investigation continues.”

The Minister of Public Diplomacy responded to the letter of the FPA that “the actions of the IDF as seen in the video were brought to our knowledge and at this stage are being examined by the IDF. I found that the language used by the FPA in its response is worrisome, unprofessional and inappropriate to an organisation representing the media. I cast doubt on the ability of journalists, who cynically compare Israeli democracy with dictatorial regimes and refer to Israeli democracy as “self-declared,” to present an objective picture to their readers.”