The weekly demonstration in Nabi Saleh faced brutal repression from the Israeli military on Friday, July 13.

Beginning at 1:30 p.m., Palestinian and solidarity activists walked down the village road to find it closed off by Israeli border police and a ‘skunk’ tank, which pumps out a foul-smelling liquid. The crowd headed to Nabi Saleh’s stolen water spring which was annexed by the nearby illegal Israeli settlement of Halamish. The protesters were met at the foot of the southern hill by Israeli soldiers resulting in 4 arrests: 3 Israeli activists and one Palestinian. 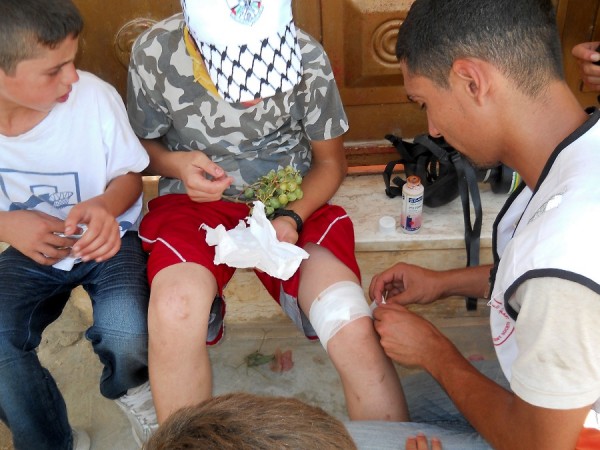 The demonstration continued to the entrance to the village, where Israeli border police shot a number of rubber-coated steel bullets into the crowd. One protester was shot in the arm and a young Palestinian boy also injured his leg in the process and needed medical care from the Palestinian Red Crescent.

‘Skunk’ water was sprayed at the protest as well as directly into Palestinian homes as a form of collective punishment. Deafening sound bombs were thrown in various directions. 7 more internationals were arrested, either for participating in the protest or just for being in the village of Nabi Saleh on a Friday. 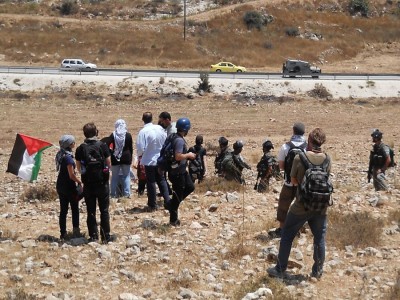 After a final tour with 2 military jeeps and the skunk tank, Israeli forces left Nabi Saleh at 5 p.m. Of the 11 arrested, the Palestinian was released within the hour, the Israeli activists some hours later, and the International activists stayed in prison overnight. They faced accusations in court and were not released until 1:00 a.m. on Sunday night. They are forbidden to join any further demonstrations and must leave the country by July 19.

The village of Nabi Saleh was declared a closed military zone (CMZ) every Friday and any solidarity activist, or Palestinian not from the area can be arrested on the charges of entering a CMZ. The increased targeting and subsequent deportations is a further attack by Israel on international solidarity activism and the ability to spread the free word.

Hakim M. is a volunteer with the International Solidarity Movement (name has been changed).