On Friday, July 13, several protesters were injured when the Israeli Occupation Forces (IOF) fired tear-gas and rubber-coated steel bullets at the weekly peaceful demonstration in the Palestinian village of Kufr Qaddoum. One man was shot in the head by a tear-gas grenade and was taken to hospital. Two other men were badly injured by rubber-coated bullets. 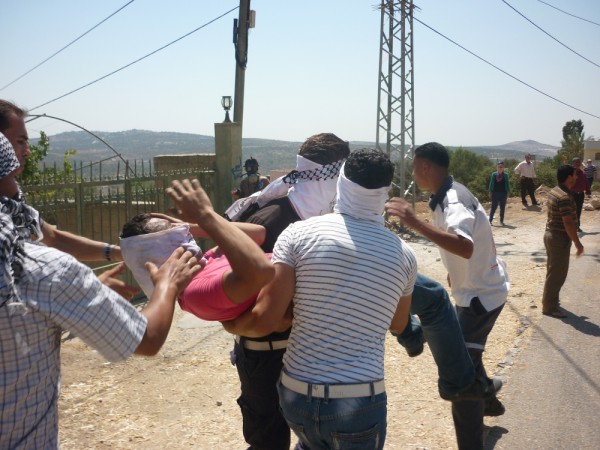 A home adjacent to the demonstration was hit by tear-gas grenades and caught fire. One child, 2 men, and 4 women were injured by the fire and smoke. An ambulance arrived but was delayed for 30 minutes because of the IOF attacks on the village. A hand displays the bullets fired by the Israeli army. Beneath a thin rubber coat is a steel sphere.

The IOF also employed use of the ‘skunk’ truck which pumps out a foul smelling water and released several sound bombs to terrorize the village. Although illegal, most of the tear-gas was fired at body-level rather than in an arch in the air. Often, 10-12 canisters were fired at a time.

The purpose of the weekly demonstration in Kufr Qaddoum focuses on the closure of the main road that connects the village with Nablus. The road, which passes alongside the nearby illegal settlement of Qedumim, was closed to Palestinian access. As a result, the journey to Nablus has increased from 15 minutes to 40 minutes. This has resulted in hardships because many residents travel daily to Nablus for work, studies, or health care.

On Thursday, June 12, the residents of Kufr Qaddoum celebrated the one year anniversary of their Friday demonstrations. During this year, 60 people have been arrested, 65 people have been shot and badly injured by tear-gas canisters, 200 olive trees have been burned, and the town has suffered systemically from nightly raids and harassment by the IOF.

Amina Simonsson is a volunteer with the International Solidarity Movement (name has been changed).