New
Home / In the Media / The war on Palestinian soccer: Free Mahmoud Sarsak

On June 3, Palestinian national soccer team member Mahmoud Sarsak completed 80 days of a grueling hunger-strike. He had sustained the strike despite the fact that nearly 2,000 Palestinian inmates had called off their own 28-day hunger strike weeks ago.

Although the story of Palestinian prisoners in Israel speaks to a common reality of unlawful detentions and widespread mistreatment, Sarsak’s fate can also be viewed within its own unique context. The soccer player, who once sought to take the name and flag of his nation to international arenas, was arrested by Israeli soldiers in July 2009 while en route to join the national team in the West Bank. 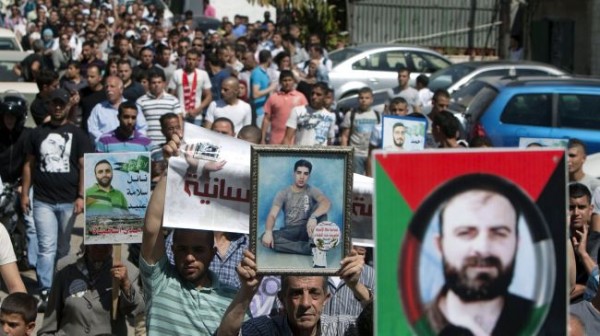 Palestinian protesters hold a demo in East al-Quds (Jerusalem) on May 5, 2012 to demand the release of Palestinian prisoners in Israeli prisons.

Sarsak was branded an ‘illegal combatant’ by Israel’s military judicial system, and was since imprisoned without any charges or trial.

Sarsak is not alone in the continued hunger strike. Akram al-Rekhawi, a diabetic prisoner demanding proper medical care, has refused food for over 50 days.

At the time of writing of this article, both men were reportedly in dire medical condition. Sarsak, once of unmatched athletic built, is now gaunt beyond recognition. The already ill al-Rekhawi is dying.

According to rights groups, an Israeli court on May 30 granted prison doctors 12 more days before allowing independent doctors to visit the prisoners, further prolonging their suffering and isolation. Physicians for Human Rights – Israel (PHRI), which has done a remarkable job battling the draconian rules of Israeli military courts, continues to petition the court to meet with both al-Sarsak and al-Rekhawi, according to Ma’an news agency.

Sadly, the story here becomes typical. PHRI, along with other prisoners’ rights groups, are doing all that civil society organizations can do within such an oppressive legal and political situation. Families are praying. Social media activists are sending constant updates and declaring solidarity. Meanwhile, the rest of the world is merely looking on – not due to any lack of concern for human rights, but due to the selective sympathy of Western governments and media.

Think of the uproar made by US media over the fate of blind Chinese political activist Chen Guangcheng. When he took shelter in the US embassy in Beijing, a near-diplomatic crisis ensued. Guangcheng was finally flown to the US on May 19, and he recently delivered a talk in New York before an astounded audience.

“The 40-year-old, blind activist said that his lengthy detention (of seven years) demonstrates that lawlessness is still the norm in China,” reported the New York Post on May 31. “Is there any justice? Is there any rationale in any of this?” Chen asked. Few in the US media would contend with the statement. But somehow the logic becomes entirely irrelevant when the perpetrator of injustice is Israel, and the victim is a Palestinian. Al-Rekhawi is not blind, but he has many medical ailments. He has been in Ramle prison clinic since his detention in 2004, receiving severely inadequate medical care.

Sarsak, who has been a witness to many tragedies, is now becoming one. The 25-year old had once hoped to push the ranking of his national team back to a reasonable standing. If Palestinians ever deserve to be called ‘fanatics’, it would be in reference to soccer. As a child growing up in Gaza, I remember playing soccer in few minute increments, braving Israeli military curfews, risking arrests, injury and even death. Somehow, in a very crowded refugee camp, soccer becomes tantamount to freedom.

Palestine’s ranking at 164th in the world is testament not to any lack of passion for the game, but to the constant Israeli attempts at destroying even that national aspiration.

The examples of Israeli war on Palestinian soccer are too many to count, although most of them receive little or no media coverage whatsoever. In 2004 Israel blocked several essential players from accompanying the national team out of Gaza for a second match against Chinese Taipei. (Palestine had won the first match 8-0.) The obstacles culminated in the March 2006 bombing of the Palestinian Football Stadium in Gaza, which reduced the grass field to a massive crater. Then, in the war on Gaza (Cast Lead 2008-09), things turned bloody as Israel killed three national soccer players: Ayman Alkurd, Shadi Sbakhe and Wajeh Moshtahe. It also bombed their stadium again.

Sarsak was a promising new face of Palestinian soccer. In times of Palestinian disunity and factionalism, it was the national team that kept a symbolic unity between Gaza and the West Bank – and indeed Palestinians everywhere. These young men exemplify hope that better times are ahead. But Sarsak’s star is now fading, as is his life. His mother, who hasn’t seen him since his arrests, told Ma’an that she thinks of him every minute of each day. “Why is there no one moving to save his life?” she asked.

Writing in the Nation on May 10, Dave Zirin wrote, “Imagine if a member of Team USA Basketball-let’s say Kobe Bryant-had been traveling to an international tournament only to be seized by a foreign government and held in prison for three years without trial or even hearing the charges for which he was imprisoned…Chances are all the powerful international sports organizations-the IOC, FIFA-would treat the jailing nation as a pariah until Kobe was free. And chances are that even Laker-haters would wear buttons that read, ‘Free Kobe.’”

Sarsak is the Bryant of his people. But ask any political commentator and he will tell you why Mohmoud Sarsak is not Kobe Bryant, and why Al-Rekhawi is not Chen. It is the same prevalent logic of a powerful Washington-based pro-Israel lobby and all the rest. Even if the logic was founded, why are international sports institutions not standing in complete solidarity with the dying Sarsak? Why don’t soccer matches include a moment of solidarity with killed Palestinian players, and the dying young man aching to join his teammates on the field once more? Why is Israel not fully and comprehensively boycotted by every international sports organization?

“As long as Sarsak remains indefinitely detained and as long as Israel targets sport and athletes as legitimate targets of war, they have no business being rewarded by FIFA or the UEFA, let alone even being a part of the community of international sports,” wrote Zirin.

It would be a belated step, but an unequivocally urgent one, for Palestinian sportsmen are literally dying.