New
Home / Gaza / Wheat farmers under fire in Gaza: We must continue to work our land

Wheat farmers under fire in Gaza: We must continue to work our land 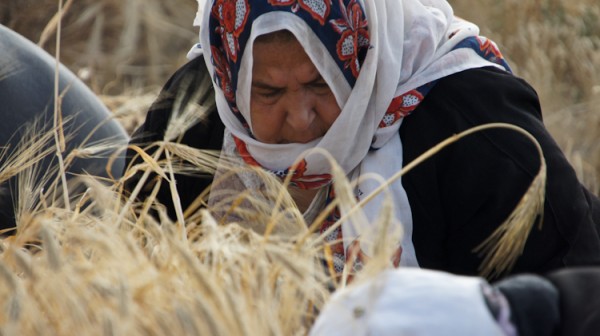 Today we went farming with the family of Ahmed Saadat.  We arrived in Khuzaa at about 7 AM and met Ahmed. He told us that the Israeli’s had already shot at his family when they went to their land to begin work.  We went to the land, which lies 300 meters from the border and directly on the buffer zone.  You immediately know the buffer zone, nothing is planted in it, no trees are left, and everything has been destroyed, only weeds grow there.

Ahmed and his family began to work, ten people on their knees harvesting wheat by hand.  To harvest the wheat they pull it up by the roots and tie it into sheaves to be taken to a threshing machine.  The land is quite large, in the past perhaps they would have hired a combine to harvest the wheat so that they would not have to do it by hand, but now it is dangerous to bring equipment near the buffer zone.  Now, they work by hand.

At about 7:45 AM an Israeli Occupation Forces Humvee pulled up onto a hill north of us.  Soon shots began to ring out, these were not directed at us, they were directed at farmers harvesting wheat to our northwest.  At about 8 AM soldiers in a tower next to the Humvee launched either tear gas or a smoke grenade, it landed extremely close to the tower, which was about 400 meters from us.  This was soon followed by shooting at us.

Bullets whistled past our ears, they slammed into the ground around us, most of them about 20 meters away from us.  The farmers were scared, but most of them kept working.  They have little choice, the IOF shoots a lot in this area, it is inevitable that they will be shot at while they try to harvest their wheat.  After a minute or two of shooting the bullets stop.  Soon the Humvee drives down off of the hill and moves further down the border.  All morning long the Humvee drives up and down the border, accompanied by two jeeps.

The farmers continue to work harvesting wheat.  At about 8:30 Ahmed receives a phone call.  It is from Ma’aan organization. They say that the Red Cross has called them asking Ahmed and advising him to leave the area. He is advised to go two kilometers from the border because of the danger.  The Red Cross had been called by the IOF asking them who we were, and if we were internationals with the farmers.

Ahmed laughs, two kilometers is the other side of Khuzaa.  The farmers continue harvesting their wheat until about 11 AM.  While they work chmed tells us a little bit about his family.  Like most Gazans, they are refugees. His family is from Salame, near Jaffa.  They were expelled in 1948.  His family still has the documents proving that they own the land they were expelled from.  Now, his family works what land they have managed to buy in Gaza over the years.

He said, “What am I to do, Israel expelled us from our land, now they steal more of it, they shoot at us, but we need this wheat to live, we must continue to work our land.”