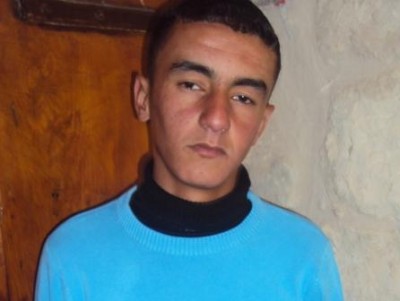 On 10 March 2012, a 16-year-old boy from Hebron is attacked by an Israeli border policeman and then detained at Kiryat Arba’s police station after his family’s mule cart is stolen by settlers.

“I live in the old city of Hebron, about 100 metres from the Ibrahimi Mosque [burial site of Abraham],” says 16-year-old Izat. “There is an Israeli checkpoint about 30 metres from us, and the settlers who live in the settlement of Kiryat Arba use the street in front of our house to go to the shrine.”

At around 11:00 am on Saturday, 10 March 2012, “my mother looked out the window and saw around 10 settlers stealing my father’s mule cart,” explains Izat. “There were soldiers at the checkpoint and in the street but they stood by and did not intervene.”

A border policeman standing at the checkpoint suddenly approached and started beating Izat. “Without any prior warning,” says Izat, “he started punching me in the face and knocked me down. Then, he kicked me hard in the head, chest and legs, and called me ‘Arab trash ‘ and other names. I was shouting in pain and trying to get up, but he kept kicking me while I was still lying on the ground. […] My mouth was bleeding.”

Another police officer arrived at the scene and ordered the policeman to stop beating Izat. “Why did you hit the boy? It’s against the rules,’” the officer said to the policeman. “After that they tied my hands behind my back very tightly with two plastic cords. It was very painful. They did the same to my father and my cousin,” says Izat.

After interrogating Izat, his father and his cousin, the interrogator told them that the three of them were under arrest until the following day. “He said we were under arrest based on the statement of the border policeman, who accused me of insulting him and pushing him first,” says Izat.

Izat’s father begged the officer to let Izat go so he could go to the hospital. After consulting with his superior, the officer agreed to release Izat on 500 shekels bail. “I was taken to ‘Alia Hospital,” says Izat. “They gave me first aid and treated my wounds. Luckily, I did not have any internal injury. I only sustained bruises to my head and shoulders, and an injury in my mouth.”

Izat’s father filed a complaint against the border policeman who assaulted Izat, and was released later that night. His cousin, however, was detained in Etzion interrogation centre for eight days. Izat’s trial in a military court has been scheduled for September 2012.