New
Home / In the Media / Spring time in Ni’lin: Photos of the demonstration

Spring time in Ni’lin: Photos of the demonstration 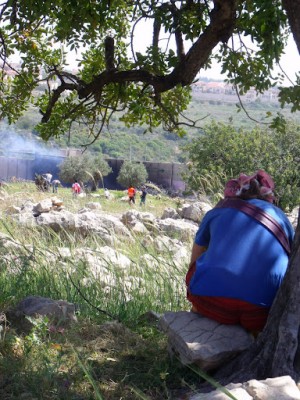 I’m a bit slow at writing things up, so in the meanwhile, here are some photos  of this past Friday’s action in Ni’lin.  To me the the most vivid pictures were the shebab, including boys who looked as young as 12 , symbolically lobbing stones at and over the gate and wall (probably not visible in my photos), amid clouds of stinging teargas and stinking “skunk water,” and Mohammed Amira calmly standing with his megaphone addressing the soldiers in Hebrew (telling them to go home to their families, and basically trying to get them to reflect on what they’re doing), while himself being sprayed with teargas and targeted with skunk water (they missed him with the “skunk,” as far as I could tell as we returned to his home for cold drinks and a rest, and didn’t notice the tell-tale stench of sewage he would have been carrying if hit.

Maxine Kaufman-Lacusta is a volunteer with International Solidarity Movement.