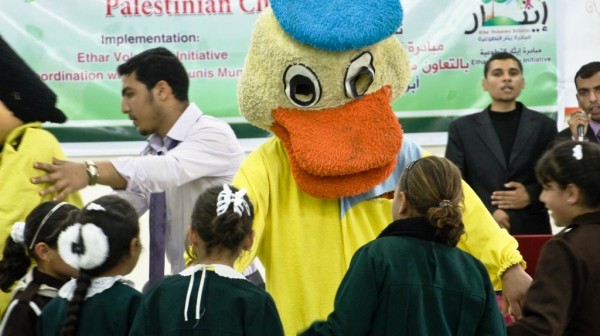 Poverty is pervasive in Gaza.  After 44 years of occupation, and six years of siege the economy is in tatters.  Exporting anything is basically impossible, farming is crippled by the no go zones which encircle Gaza leaving over 30% of agricultural land off limits, the fishing industry has been devastated by the 3 mile limit on fishing imposed by Israel.  Gaza survives on the tunnels.  All this being said, as a Palestinian friend once proudly told me, no one starves in Palestine.  This is true.  Palestinians have created an amazing network of charity organizations that help to blunt the worst effects of the occupation.  Today, in Khan Yunis, we saw this network at work.

The municipality of Khan Yunis teamed up with the Ethar Initiative to provide a day of fun for local children from poor families.  Ethar is a volunteer group which works to help disadvantaged children and families; they provide opportunities for women to make money to support their families as well as sponsoring days like this one.  Today about 80 children from several local school were brought to the Municipality building of Khan Yunis for a party.  The celebration started at ten o’clock.  First, was singing, children volunteered eagerly from the crowd to have the chance to come and sing in front of everybody.  Then the children moved on to games, blind man’s bluff, musical chairs, an apple eating contest, and games with balloons.   The winners of each game were rewarded with a goodie bag containing coloring books and school supplies.  In the end though, who won didn’t matter, all of the children were sent home with a goodie bag. 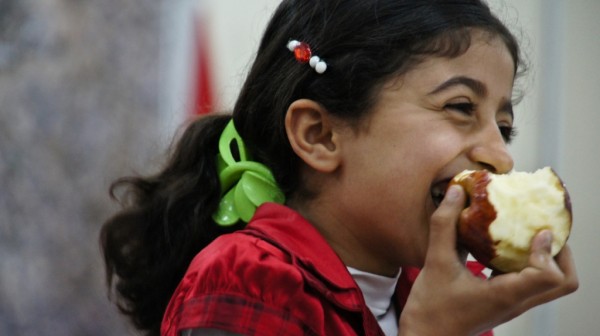 Days like today remind us that the people fighting the occupation aren’t just politicians and those that go to demonstrations.  Farmers who continue to farm their land despite harassment from settlers, fisherman who continue to fish despite being shot at by the Israeli Navy, and volunteers that work to provide the children with some happiness amongst the problems that surround all fighting the occupation.  The Naqba, the Naqsa, the occupation, two Intifadas and the massacre of Gaza have not broken Palestinian steadfastness.  This steadfastness wouldn’t be possible without the efforts of volunteers who work to provide so much of what the occupation tries to take away, hope, joy, and whatever small moments of pleasure that can be seized.

Tagged with: Children Day of the Child Gaza Khan Younis