New
Home / Gaza / The mourning tent of a martyr

The mourning tent of a martyr 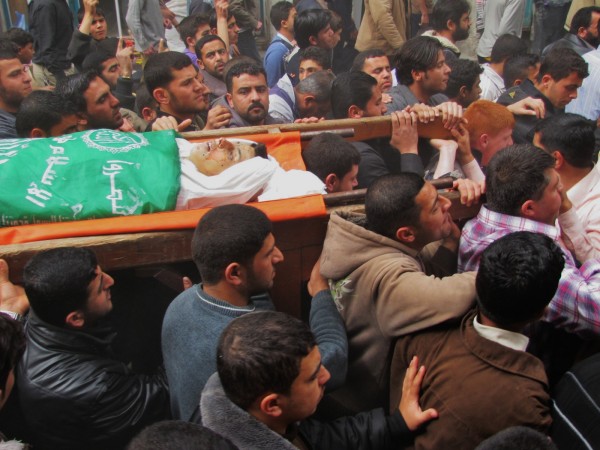 Nayif Qarmout was murdered yesterday; he was also buried yesterday, in a small cemetery in the heart of Jabalia, the refugee camp where he lived.  He was only 14 years old.  He was murdered by an Israeli missile while playing football with his friends.  He was a handsome young man, the photo on his martyr posters make that obvious. It was something that I never would have guessed at his funeral,  looking at his bloody bruised face.

Today, Nayif’s family mourned.  The reception line of men lining the entrance to the mourning tent was the most shattered group of men I have ever seen.  Their faces were blank, dead, as though Nayif was not the only murdered yesterday.  Nayif’s photo was on the wall, he looks so young, a child just turning into a man.  We sat down and ate dates as a young man brought coffee around.  Nayif’s uncle, Abdullah came over to talk to us.

Abdullah tells us that not only was Nayif a handsome child, but he was also a joyful child.  He was always laughing, always making jokes, always helping his parents with his younger brothers and sisters.  Nayif was the oldest child; he had three younger brothers and two younger sisters.  He was not only the oldest child, but also the oldest grandchild; he was named after his grandfather.  After school he worked with his father in family’s pharmacy, helping customers and keeping track of the accounts.  Nayif hoped to run this pharmacy someday, after university, when he was a man.  That is a chance that Nayif will never have.

Monday morning Nayif woke early.  He got dressed and went to school, after school he was supposed to come to the shop to help his father.  When he arrived at school, he found it closed because of the Israeli attacks.  He met some of his friends; they went to play football before they went home for the day.  While they were playing football an Israeli drone fired a missile at them, at six children playing football on a day off from school.  Nayif’s family received a call that Nayif had been injured and was on the way to the hospital.  They all rushed to the hospital, but there was nothing to be done, they did not even have the chance to say goodbye to their son, he was dead when they arrived at the hospital.

Nayif’s family is left with their sadness; nothing will bring back their son.  Perhaps, though, as Um Nayif asked us, something can be done to save other children, “stop the killing of children, don’t abandon Palestine. Nayif went to the school, he was a student and Israel killed him. I know that now he’s gone to God. His brothers and sisters cry because they lost their elder brother.”

Nathan is a volunteer with International Solidarity Movement (name has been changed).