In the outer part of Bethlehem very close to Rachel’s Tomb, Mariam (who wishes not to use her actual name) runs her small Palestinian souvenir shop. But this is not a shop in the usual touristic places of Bethlehem,  and not a place you find if you don’t know about it.

Despite these facts, this small shop has become the only income for Mariam and her family since it opened two years ago.

Before 2002 her husband had an auto mechanic shop in this building, perfectly located right next to the main road to Jerusalem. The business was good back then. Palestinians as well as Israelis came here to get their car fixed or buy parts, and just next door, Mariam had a shop for home accessories. All this changed radically in 2002 when the area became a “military zone.”

Suddenly the road was closed and the family that lives on the floors above the shops became prisoners in their own home as soldiers turned their house into a military base. Sometimes they took a  room or two, but other days the whole family of seven were forced to stay in one room without being able to go out.

Both shops had to close and life became hard. The next year in 2003, the Israeli government built the apartheid wall that is now surrounding the house from three sides. The land around them that is owned by her uncle was confiscated and is now on the other side of the wall, out of reach for the family that no longer can travel outside the West Bank without permission, a permission that is rarely given. 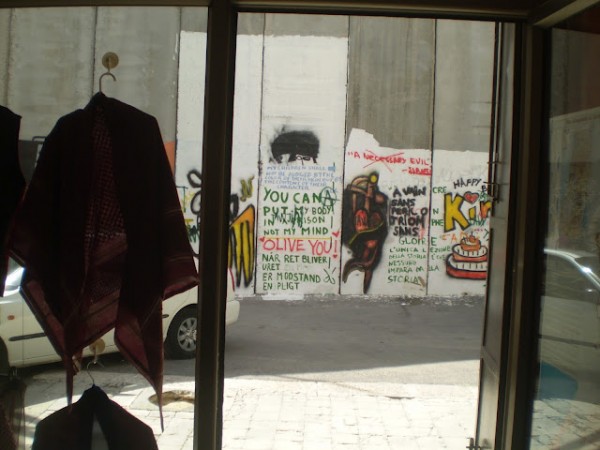 The travel situation was also different before the wall. Mariam, like other Christians, has strong bonds to Jerusalem, and she used to volunteer in a church in the city that she visited almost every day. It used to take her 15 minutes to get there. Now she only gets permission to visit Jerusalem for Easter and Christmas, and how long it takes to get there depends on the mood of the soldiers at the check point.

Today ten years later, the house is not occupied anymore, but no one can access the roof. Nor are they allowed to do any repairs, and the wall that surrounds the house has cameras pointed to watch every room, making private life close to nonexistent.

The small income from the souvenir shop is also highly taxed as the family lives in what is called Area C. This means that she has to pay taxes to the Israeli government like everyone in Area C is under direct Israeli control. But since Israel is not giving anything back to Palestinians for the tax money, like insurance, she also has to pay tax to the Palestinian Authority to get this covered.

“Life is not easy here,” she said, looking out the door at the 8 meter high concrete wall that has cut her family off from their former life, forcing them to live in an isolated corner.

Axel is a volunteer with International Solidarity Movement (name has been changed).