by Mira, Rune and Paige 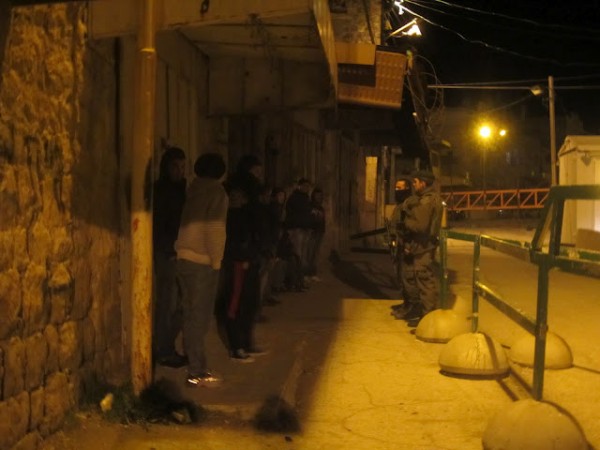 With the change of the  Israeli army brigades last week, it has not been quiet in Al Khalil. It seems like the new soldiers are using the city as a training field.

It started about  one about a week ago, on Sunday March 18th, when the 100 soldiers from the Kfir brigade arrested one boy, closing down several streets in the process.  On Sunday the streets were once again filled with hundreds of soldiers, many houses were raided, and many more Palestinians were detained for several hours without reason.

The raids began at approximately 9:00 PM in the Tel Rumeida area, and continued well past midnight on Shuhada street, near the Qeitun checkpoint, and in the area of the Qordaba girls’ school.  At 10 pm around 100 soldiers escorted 17 men and teenage boys taken during the house raids through Qeitun checkpoint where they were forced to stand lined up against the wall while soldiers screamed at them in Hebrew.  All were eventually let go, though four young men were held until 1:00 AM.

Among the raided houses, is the home of the Abu Mohammad family which had suffered much harassment from the military in the past few months.  The house is split in two parts, and about 2 months ago the soldiers started to occupy the left half of the building, forcing the almost 30 people living there to move to the right part. The families living in the house have filed a lawsuit that is yet to be decided. Sunday night the soldiers raided the entire house, forced all the inhabitants outside and searched every room. After that they moved to the roof, were they broke the water-pipe, and stayed for several days. The water is leaking in the house, but the tenants are not allowed to go on the roof and fix it.

The house of the Abu Ahmed family was raided three times throughout the course of the night, the Israeli army forcing the family out on the street while the soldiers searched the house again and again. Three  generations live in the house  including four children all under the age of 7. The soldiers did not explain why they were there or what they were looking for. A 65 year old resident of this house explained  that this is normal for them.

In another house raid near the illegal settlement of Beit Hadassah, a young girl fell and hit her head and was unconscious for several minutes after soldiers forced her and her family out of their front door.  As the ambulance could only reach as far as the checkpoint at the end of the road, the girl was forced to walk to the checkpoint to meet the ambulance.  The soldiers at the checkpoint prevented her from crossing to the ambulance for fifteen minutes.

Mira, Rune, and Paige are volunteers with International Solidarity Movement (names have been changed).