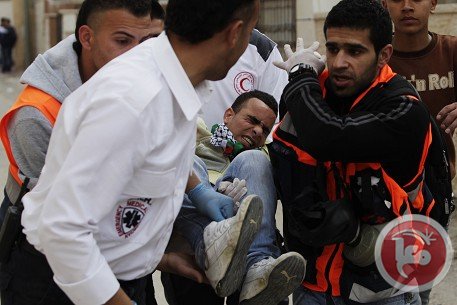 Medics carry an injured protester during clashes between protesters and Israeli forces at a demonstration marking Land Day, at Qalandiya checkpoint Ramallah on March 30. (Reuters/Darren Whiteside)

BETHLEHEM (Ma’an) — The Palestinian Red Crescent treated 339 protesters on Friday at protests around the West Bank to mark Land Day, a spokesman said.

Muhammad Ayyad told Ma’an that five people were seriously injured and 55 hospitalized as protesters commemorated six Palestinians who were killed by Israeli forces in 1976 at demonstrations against Israel’s land confiscation in the Galilee.

The largest rally took place in Qalandiya, a checkpoint near Ramallah, where 249 were treated for injuries and 20 hospitalized.

Similar confrontations broke out at a checkpoint in Bethlehem, where Ayyad said medics treated 38 people including 11 who were hospitalized.

In Jerusalem, medics treated 35 people, 19 of whom were transferred to hospital. Four people were hospitalized in Iraq Burin, near Nablus and 13 were injured in Kafr Qaddum at simultaneous protests.