New
Home / Gaza / Khamis, injured by the Israeli navy while fishing in the waters of Gaza

Khamis, injured by the Israeli navy while fishing in the waters of Gaza

The Khamis family’s home, in Al-Shati camp (“Beach” camp), is poorly lit , the ceiling falls into pieces, and there is no glass on the windows. 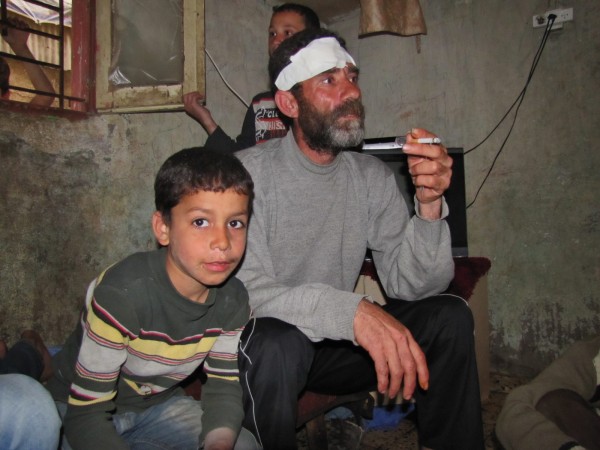 Khamis has a bandage on his forehead. The doctors sewed his wound with three stitches. A group of children crowded the room during our visit.

Khamis was on the boat with his 16 year old son and three cousins.

“The previous day I sent my son to the gasoline station, we decided to go fishing on Sunday morning. While we were at sea, the Israeli Navy started to shoot using water cannons. Suddenly my son told me that there was blood on my face, I was wounded.”

“It was a waste of time and gasoline, -Khamis continues, – hours and hours spent at the gasoline station in order to get the fuel.

The Israeli navy ship fired continuously  since the morning and it turned quickly around our boats in order to create waves.”

Khamis and the other fishermen were in the “permitted” area, designated by Israel within three nautical miles from the coast. Nonetheless, the soldiers were shouting to them, “Go to the south, go away.”

There were more than twenty fishing boats at sea. But because they could not fish anymore, they all went back to the port.

Khamis has worked for thirty years as a fisherman and has nine children. In the same home live also the families of his relatives, totaling about one hundred people. They all depend on fishing.

I ask Khamis how much they can gain from fishing. “150 shekels,” he answers me which is the equivalent of $40, “but half of it goes to pay the gasoline only. The rest is divided by five, so we gain a maximum of 20 shekels each.”

Khamis tells us that there is no way to fish beyond three miles. The Israeli navy ships arrive quickly. Once their boat overturned and they felt in the sea.

I finally ask Khamis if he feels like sending a message to the international community.

Khamis is just one of the many fishermen injured by the Israeli navy in the waters of Gaza.Israel regularly attacks the Palestinian fishermen within the limit of three nautical miles and prevents them from fishing by using firearms and water cannons.The restrictions on the fishing area have a significant impact on the subsistence of the fishermen of Gaza. This area should extend for 20 nautical miles according to the Jericho Agreements of 1994 (under the Oslo agreements), but was then reduced to 12 miles, then 6 and finally at 3 miles in January 2009. The “buffer zone” of water imposed by Israel prevents the Gaza fishermen from accessing the 85% of the marine area  that the Oslo agreement entitles them to use.