New
Home / Journals / We Are With Hana Shalabi and Al Aqsa: Demonstration in the No Go Zone in Beit Hanoun

We Are With Hana Shalabi and Al Aqsa: Demonstration in the No Go Zone in Beit Hanoun 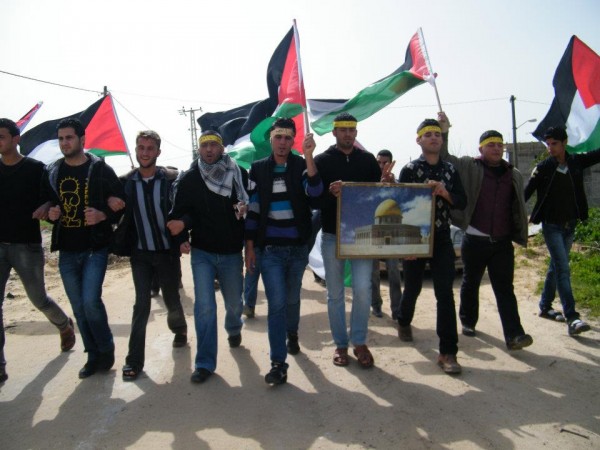 Israeli riot police have entered the Al Aqsa Mosque Compound, Palestinians have struggling to protect it for days.  After 66 days Khader Adnan has ended his hunger strike, hopefully, soon, he will be home with his family.  Even before his hunger strike ended the newest one had begun.  Hana Shalabi, a young woman from the West Bank, was put into “administrative detention” on February 16, 2012.  Like Khader Adnan she has been charged with no crime.  Like Khader Adnan she finds dignity more important than food.  Hana Shalabi was only recently released from Israeli prisons, freed in the latest prisoner exchange between Israel and Palestine.  She had spent over two years in prison when she was released, she had not been charged with a crime that time either.  These are the things that inspired this week’s demonstration against the no go zone and the occupation in Beit Hanoun. 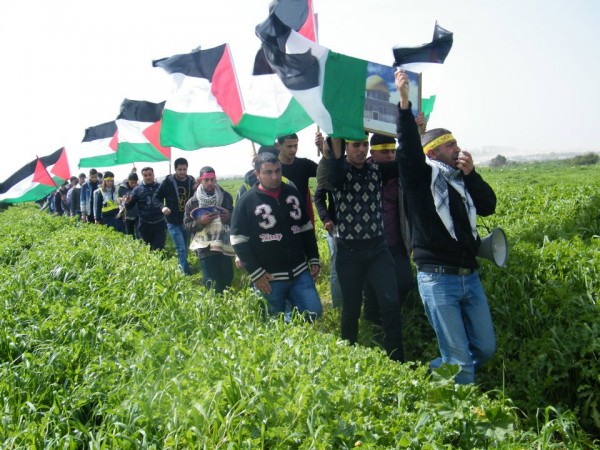 As we gathered on the road beside the half destroyed Beit Hanoun Agricultural College the wind blew fiercely.  The flags did not wave in the breeze, they were held stretched out in full.  Those that did not have flags had posters of Al Aqsa.  Music played over the megaphone.  We marched quietly and quickly down the road to the no go zone.  As we approached the buffer zone the chanting began, dozens of young men pledging to defend Al Aqsa and demanding the end of occupation.  We marched to the ditch that bisects the no go zone, we stopped.  Sabur Zaaneen from the Local Initiative of Beit Hanoun said a few words, “Al Aqsa is at the center of our nation, it is at the center of our life, we will not abandon it.”  Sabur announced that we would symbolically join Hana’s hunger strike, for two hours we would remain in the no go zone and neither eat nor drink.

Soon, the Israeli shooting began.  The first bullet I thought was perhaps the crack of a flag in the wind; there was no mistaking the bullets after that.  We retreated a bit, then the young men stopped and rallied.  The flag we had been standing by now had a hole in it.  We walked back toward the wall; soldiers appeared on top of the concrete tower from which they had so recently shot at us.  The soldiers started to fire tear gas at us.  The fierce wind carried it away too quickly for it to be really effective.  They started to shoot at us again.  The bullets whistled over our heads.  We were unarmed demonstrators, who had not so much as thrown a ball of cotton, who had no guns, being shot at by soldiers in a concrete tower.  This is the only way the occupation knows how to speak, with bullets, with tear gas.  We started to walk back toward Beit Hanoun, bullets whistling over our heads.  We stopped at the edge of the no go zone.  Some of us set down to continue our symbolic hunger strike.  The Israeli bullets began again.  They continued to shoot as we walked back to Beit Hanoun.  The entire time the Israeli soldiers shot at us Hana Shalabi refused to eat and drink, her refusal is louder than their bullets.  We will win.