by Aaron and Silvia

The divided city of Al Khalil (Hebron) was transformed into a war zone this Friday, as thousands of Palestinian, Israeli, and international activists attempted to peacefully reopen the segregated Shuhada Street and were violently attacked by the Israeli military. Soldiers and riot police used tear gas, sound bombs, sonic weapons, and foul-smelling ‘skunk water’ to break up demonstrations at three different locations, resulting in numerous injuries that sent at least 95 to area hospitals. The demonstrations were the culmination of a week of protest against the closure of Shuhada Street and commemorated the 1994 Goldstein Massacre, in which a Zionist extremist murdered 29 and seriously wounded over 150 Muslims praying at the nearby Mosque Al-Ibrahimi. The call for this Third Annual Global Day of Action to Open Shuhada Street resulted in over 35 actions internationally, organized by scores of groups. In Al Khalil, two local demonstrations (organized by Youth Against Settlements and Hebron Defense Committee) directly confronted the racist laws preventing them access to their once-main street in the heart of the City.

The larger demonstration left after prayers at the Wassaya Rasoul Allah Mosque in the economically strangled Qeitun neighborhood, just inside the Israeli-controlled H2 zone of Al-Khalil. From there protesters marched and bussed two kilometers towards the Qeitun checkpoint, at which Palestinian are denied access to Shuhada street. Along the way, youth activists from across the West Bank kept the atmosphere festive with chants, drums, banners, and street theater. Activists in white clothing covered in red paint lay down across the road, bearing messages of “The Occupation is Killing” and “End Israeli Apartheid”, to represent the economic, emotional and physical suffering of Palestinians under Occupation.

As activists neared the military’s position some hundreds of meters from the checkpoint, they were quickly attacked with repeat volleys of tear gas and sound grenades, driving protesters back and disrupting the peaceful march. Soldiers arrested local organizer Badia Dweik (39), a member of Youth Against Settlements, along with five other Palestinians. As the military pushed forward with further barrages of tear gas, sound bombs, and a noxious-smelling chemical deterrent called ‘skunk water’, demonstrators scattered over several city blocks in every direction. Yet protesters of all ages and backgrounds returned again and again to confront the military aggression, some with stones and burning tires, but most with their presence, voices, and cameras.

Demonstrators met with the Hebron Defense Committee in the troubled neighborhood of Tel Rumeida, where Hanaa Abu Haikl has set up a tent in defiance of the closure of the main road leading to her home which forces her and her elderly parents to climb a rocky wall to enter. Settlers in the area have attacked her family with torrents of abuse and violence, even going so far as to set fire to her car. Surrounded by the charred remains of ancient olive trees, the site is now particularly tragic. Their blackened trunks are a painful remainder of what the illegal occupation has cost the Palestinians of Hebron.

The burnt skeletons of the olive trees were decorated with the Palestinian flag on the morning of Friday 24th Febuary. One hundred and sixty Israelis, Palestinians and internationals came together for the morning prayer and a brief discussion of the effects that the closure of Shuhada street has had on the people of Hebron. The atmosphere was impassioned as Hebron Defense Committee leader Hisham Shabarati described the plight of the Palestinian people through the illegal Israeli occupation.

Some 800 demonstrators walked towards an army of soldiers with their hands in the air in a show of peaceful, non-violent resistance. Despite this clear and non-threatening gesture, Israeli soldiers forced their way into Palestinian homes and roofs and began shooting tear gas and sound bombs at the protestors before the demonstration had moved 100 meters. One sound bomb caught a female reporter from the Israeli human rights organizaion B’Tselem in the back. The grenade blew a hole through her bag, badly burning her hand and back. 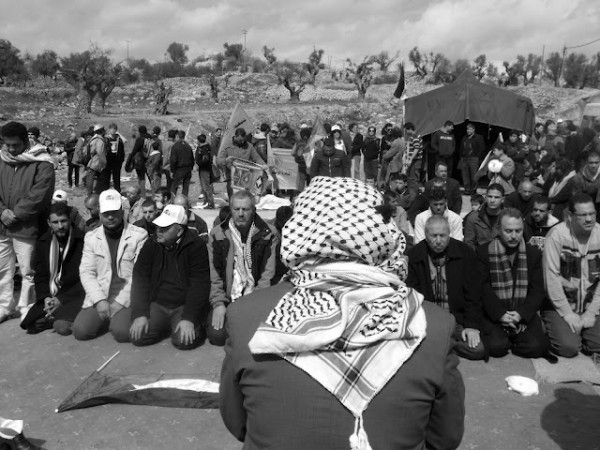 The march for Shuhada Street | Click here for more photos

A funeral procession was caught up on the street whilst the demonstration was in process. Protesters stood by to allow the body to be carried forth but Israeli soldiers used this opportunity to shoot skunk water at the demonstrators, which hit the body of the deceased and outraged the family.

Fifteen people were injured and brought to hospital following the demonstration and one person was arrested. Though the action ended prematurely, Hebron Defense Committee member Sami stated that the demonstration was “useful”, explaining that it “brought attention to the pressure put on Palestinian people in Hebron. We are here and we’re not going to move; We do not accept the military machine and its response towards non-violent resistance”.

Aaron and Silvia are volunteers with International Solidarity Movement (names have been changed).