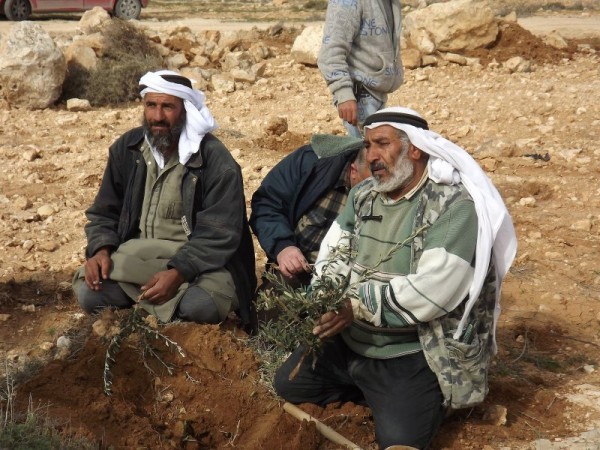 At around 12 a.m. two bulldozers and three vehicles of DCO (Disctrict Coordination Office) raided in the village of Saadet Tha’lah, escorted by four jeeps of IDF (Israeli Defense Force). One house, two water tanks and two stables for the flocks were demolished. The inhabitants said they have not been allowed to make their animals safe. Five lambs died under the rubble. The owners declared their buildings were under demolition order since 2004.

After the demolitions in Saadet Tha’lah, the army vehicles and the bulldozers reached the near Palestinian village of Ar Rakeez, where they demolished one water tank under construction and uprooted 20 olive trees and 30 almond trees planted less than one year ago.

The Palestinian villages of Saadet Tha’lah and of Ar Rakeez are situated in the South Hebron Hills area, respectively near Karmel Israeli settlement and near Avigayl outpost, which are constantly expanding without any kind of restriction by the Israeli authorities, despite the outpost is considered illegal even according to the Israeli law.

Both the villages are located in Area C, under Israeli civil and military administration. In this area every construction must be approved by the Israeli civil administration. According to OCHA oPt, the 70% of Area C is off-limits to Palestinian construction, the 29% is heavily restricted and less than 1% has been assigned by the Israeli Civil Administration for Palestinian development. Since 2011 Operation Dove registered an increase in the area of demolitions, in particular against electricity and water services.

This policy of restrictions, closure, demolition, evacuation and abuse, combined with continuing violence by settlers in the area, denies the human rights of Palestinians, hindering the possibility to live in their villages and cultivate their lands by preventing development of local communities.
Nevertheless, the Palestinian communities in the South Hebron Hills are strongly involved in affirming their rights and resist to the Israeli occupation choosing the non-violent way.