New
Home / Features / Randa Adnan: The world must intervene to save my husband

Randa Adnan: The world must intervene to save my husband 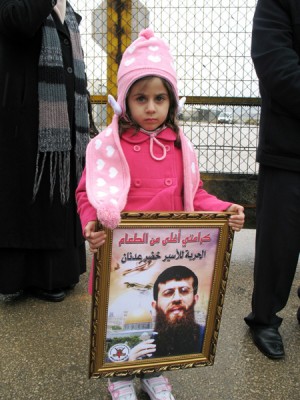 As Khader Adnan entered his 59th day on hunger strike, his wife Randa appealed for the international community to end his isolation and save his life.

“My husband is dying inside an Israeli jail. The world should make sure I am able to see him,” she said. “And it should pressure the Israeli government to release him before it’s too late.”

Khader, a 33-year-old baker, graduate Birzeit University economics student, and Islamic Jihad Movement activist, was detained in a 3:30 am raid on his home in Arraba, Jenin on December 17. Israel’s forces have arrested him eight times, and he has spent over six years in its prisons, mostly under administrative detention orders. He has been unable to complete his studies because of these repeated imprisonments.

He began a hunger strike the same day to protest Israel’s administrative detention policy and the brutality of his captors, and to demand his freedom. Israeli interrogators responded by continuing the beatings that began during his arrest, tying him into painful positions for hours, ripping hair from his beard, smearing dirt onto his face, throwing him into a “punishment cell” with bright lights and loud noises intended to prevent sleep, and denying him treatment for his gastric illness, the disc problems in his back, and the injuries their fellow soldiers had inflicted on him. After they graphically insulted members of his family, including his two young daughters and elderly mother – a form of psychological torture used by Israeli troops to extract information from Palestinian suspects – he launched a speech strike, refusing to talk with them as well.

On January 8, an Israeli military court sentenced Khader to administrative detention until May 8. Israel holds 310 Palestinians under this extrajudicial measure, which allows its military to detain prisoners indefinitely without presenting accusations or evidence against them. Like other Palestinian prisoners, administrative detainees have minimal access to their families, whom Israel denies basic information about their relatives’ cases and conditions.

“I didn’t know what had happened to him until December 30, when the court held his first hearing,” Randa said. “My security application was rejected, so the prisons administration wouldn’t allow me to see him until a human rights organization coordinated our family’s first visit to him in the hospital last Tuesday. They refused to allow us to stay with him for more than 15 minutes.”

By then, she said, her husband could barely move to greet her.  His shrunken, ulcerated body seemed like a shell, with its life already gone. She was shocked, and her daughters Ma’ali (four years old) and Bissan (one and a half) frightened, by the sight of his long nails and his beard and hair, which were overgrown, disheveled, and falling out in clumps. He told her that his captors had prevented him from bathing, grooming, or changing his clothes since his arrest, 52 days earlier.

“Israel has treated my husband without any humanity or compassion for his deteriorating health,” Randa said. “It’s obviously very bad, yet they’re not only preventing him from receiving any treatment, but also attacking his basic dignity as a human being.”

A letter from Khader’s cell in the Ramleh prison hospital Saturday seemed resigned to his likely fate. “The only thing I can do is offer my soul to God as I believe righteousness and justice will eventually triumph over tyranny and oppression,” he wrote. “I hereby assert that I am confronting the occupiers not for my own sake as an individual, but for the sake of thousands of prisoners who are being deprived of their simplest human rights while the world and international community look on.” On Monday, a military court rejected his appeal and approved his administrative detention.

Yet Randa seemed to hold onto a glimmer of hope, for her husband’s life and for the world.  “Israel denied Khader any fairness or decency,” she said. “But maybe the rest of humanity will show more mercy.”

Joe Catron is an international solidarity activist and Boycott, Divestment, and Sanctions (BDS) organizer in Gaza, Palestine. He blogs and tweets.