On the 4th of February International Solidarity Movement (ISM) and The Ecumenical Accompaniment Programme in Palestine and Israel (EAPPI) attended the replanting of 50 olive trees on the hillsides above the village of Burin, outside of Nablus. The planting went without disturbances from the surrounding illegal settlements of Bracha and Yitzhar. 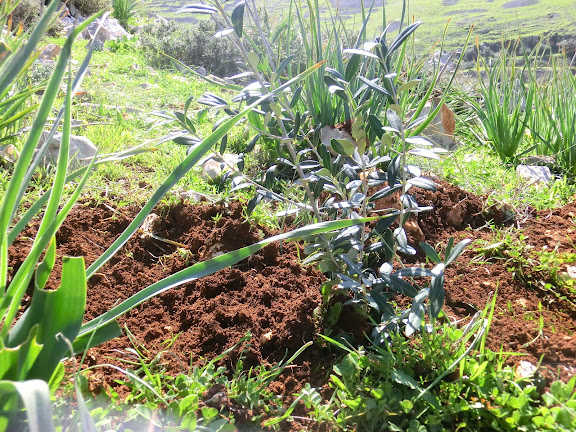 During 2011 around 3700 olive trees were destroyed in the hills around the village of Burin, most of them due to attacks from the illegal settlement Yitzhar. The 50 olive trees replanted today on the hill slopes facing the illegal settlement of  Bracha will not bear fruit for many years but serve as a long term investment for the villagers of Burin. Small as it may be, this initiative marks the relentless struggle to go on with their lives despite of Israeli occupation.

Since the campaign began to raise money for trees, donations were sent nearly daily from Australia, Italy, France, the US, Canada, Sweden, and Finland for example. According to the Trees of Resistance campaign, they  “have received support from past volunteers, hopeful future volunteers, refugees, tree lovers and just fantastical lovely generous people.”

The Bilal al Najjar youth center in Burin has also received considerable support and volunteered its members to partake in the tree planting.

After the planting volunteers were shown the ongoing construction of a new community center in the center of Burin. Some proud, young men showed volunteers the re-plastered insides of an old stone building about to be transformed by the efforts of the Bilal al Najjar center.

An international organizer of the All for Burin campaign stated that while “the center provides projects that need to be kept alive… it also gives the youth of Burin a sanctuary. A place that is theirs, where they can work, learn, plan communal activities and unite. These activities have an overwhelming importance within community. To bring children and adults together, to feel united and most of all to have and create new happy memories to be taken with everyone in the future.”

Support the further planting of trees destroyed by Zionists and help Burin’s youth center for continued peace and livelihood for Palestinian villagers that continue to face mounting threats by price tag campaign extremists and the Israeli military which defends them.