Kufr Qaddoum: Cut off road and electricity does not deter demonstrations

Villagers and internationals assembled in Kufr Qaddoum after prayer time to demonstrate against the blocking of their main road to Nablus. The army cut off the electricity in the entire village as collective punishment  for the ongoing demonstrations in Kufr Qaddoum.

The villagers, including women  and many children, walked up to the top of the village, joined by internationals and press. They stopped about 100 meters from the occupation forces, where they held speeches and sang. The occupation forces started firing a huge amount of tear gas at the crowd as a couple of kids where throwing stones. Many people were affected by the tear gas, that was fired nearly constantly from then on. 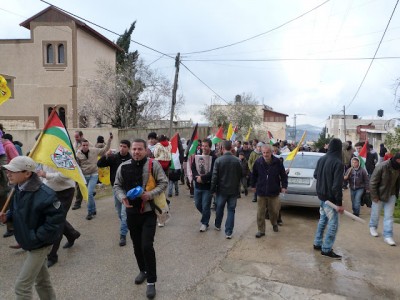 Locals and supporters march in Kufr Qaddoum on February 10th, 2012

The occupation forces finally retreated into the illegal settlement, where they kept on taking pictures and filming the protesters. The crowd walked down closer, and gathered under an olive tree, to honour the memory of a man shot dead by a settler 20 years ago in that exact spot. The village was still without electricity as we left.